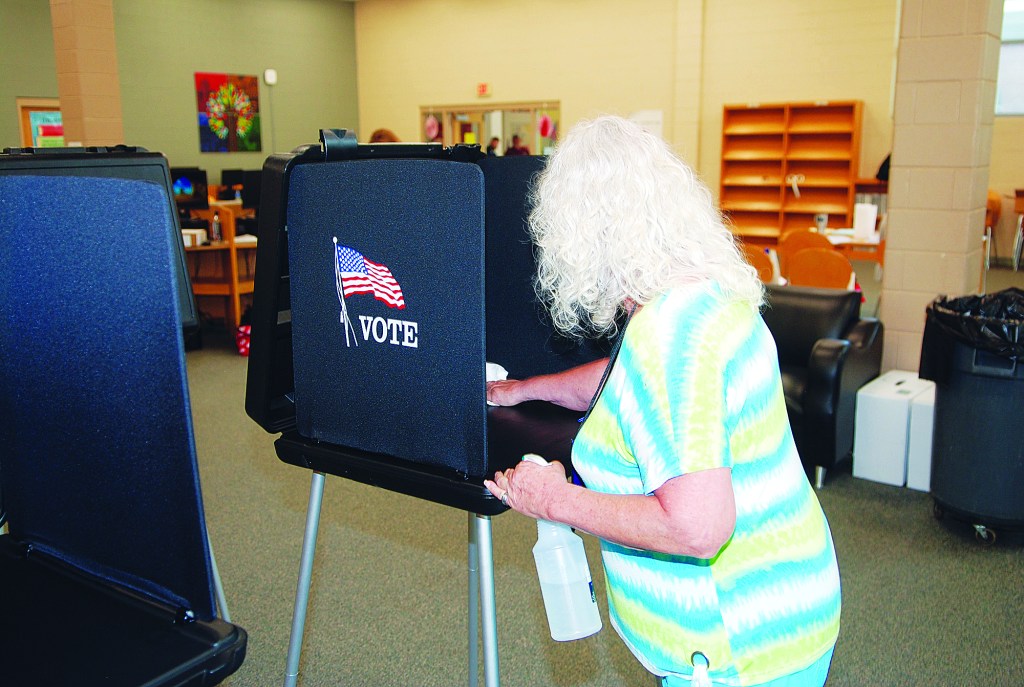 Sandi Gilchrist wipes down one of the voting booths at Campbell Junior High School during the June Primary Election. The library had three electronic voting stations and more than a dozen for paper ballots. More polling locations are expected for the November General Election. (Photo by Fred Petke)

With less than two months before the presidential and local election, preparations in Clark County are getting underway again.

Clark County Clerk Michelle Turner told the Clark County Fiscal Court Wednesday more than 2,300 people have already applied to receive their ballots by mail for the Nov. 3 election. The window to request a ballot closes Oct. 9, but early voting begins at the county courthouse Oct. 13.

Early voting and mail-in ballots are open to anyone, as will be the in-person voting locations on Nov. 3.

Turner said she is still waiting for approval to have four voting “supercenters” at Campbell junior High School, Strode Station Elementary, the Clark County Extension Office and the Clark County Courthouse. The request must be approved by Gov. Andy Beshear and Secretary of State Michael Adams, she said.

“If they take one off the table, I’ll take (the courthouse),” she said.

In June, Campbell was the only in-person voting location in Clark County. None of the established voting precincts will be available.

Turner also asked for the use of the fiscal courtroom in the courthouse for the next two months for election workers, absentee voting and a secure storage space.

Turner said they may be able to accommodate in-person Fiscal Court meetings in October.

“I would strongly encourage you to find a place for face-to-face meetings again,” Magistrate Greg Elkins said to Clark County Judge-Executive Chris Pace.

The Fiscal Court also gave up its courtroom in advance of the June primary.

Man charged with rape for relationship with juvenile