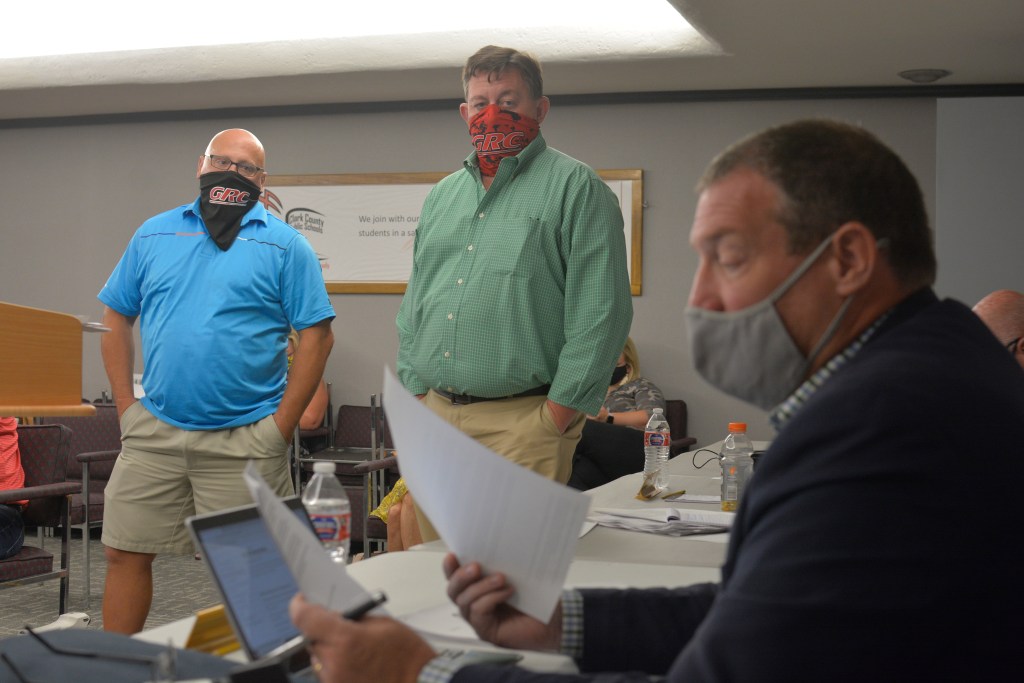 GRC Director of Athletics Jamie Keene, left, and Principal David Bolen, center, talk to the Clark County Board of Education about the plan to allows student-athletics to continue this fall. (Photo by Randy Patrick)

Clark County’s student-athletes will take the field this fall.

The Board of Education approved plans Tuesday for middle and high school sports to resume before students are allowed back in the classrooms.

During the three-hour special meeting, the first half of which consisted of a disagreement about procedural rules, the board discussed the administration’s plans for resuming sports safely during the pandemic.

Seating capacity will be limited. Spectators must wear masks at all times. There can’t be any tailgating parties or fans congregating outside their cars or outside the fence.

The visiting team’s locker room may only be used for the bathroom facilities, and if Clark County or a county whose team one of its teams is to play is in the “red zone” (meaning a 10 percent or greater positivity rate on COVID-19 testing) two days prior to a game, the game will be canceled.

The board voted 4-0 to approve the plan. One of its members, Gordon Parido, walked out before the discussion, saying the decision to resume sports could be made by the superintendent without the board’s approval.

Parido and two other members, Scott Hisle and Sherry Richardson, had wanted to talk about students returning to classes sooner rather than later but were prevented from doing so when the board chair, Ashley Ritchie, ruled the matter out of order because the board had already made a decision to discuss it Sept. 21.

The board did hear from members of the public about resuming sports.

Shawna Johnson, who has one child who is a senior and another who is a seventh-grader, encouraged the board to approve the return of sports for the benefit of the students.

If they wait too long, she said, “before you know it, the seasons will be over and the school year will be over, and those seniors do not have an opportunity to come back and play next year,” she said. “We need to make those choices now.”

“We need to become leaders and not sit back and wait and see what other districts are going to do,” she said.

“I feel like COVID is a new reality that we’re going to have to be dealing with for a very long time,” Sarah Neeley said. “You have to make a plan and do the best you can. It’s not going to be perfect, but you can’t shut it down.”

“Please come up with a game plan for us to move forward, for our kids to be part of a community and have social skills and discipline and all of the things they need to be well-rounded,” she said.

The administration had a detailed plan to present to the board for GRC and Robert D. Campbell Junior High School, and the board made only minor changes to it before approving it.

During the first of three segments of the season, seating capacity will be limited to 20 percent. Segment 1 began Monday and runs through Sept. 27 for football and Sept. 26 for the other sports.

The board will decide on the capacity for Segments 2 and 3 in the future, but the administration’s proposal is for seating capacity during those periods to be limited to 30 and 40 percent, respectively. Segment 2 would run into October, and Segment 3 would go through the end of district play.

Players, cheerleaders, band members and their families will have the opportunity to purchase four tickets, and the remainder of available tickets may be purchased online by students and community members in advance.

The rules would limit the number of cheerleaders, band members and members of the media at athletic events.

High school students may attend the games on their own, but children younger than high school age must be with their families.

Only prepackaged food such as candy bars and potato chips will be served in the concessions stands; there can’t be any hamburgers, hotdogs, nachos or other food prepared on-site.

Teams won’t have an opportunity to gather for post-game or pre-game meals.

All athletes must bring their own water bottles and may not share food.

Public restrooms will be available and will be frequently cleaned and sanitized.

Coaches must check the temperatures of players before they board the bus for away games and run through a checklist of symptoms.

Seating capacity guidelines on the buses will be adhered to, and passengers must wear masks at all times.

If a player or coach tests positive for the virus, the local health department must be contacted, and the schools must cooperate with the public health directives, including quarantine the students and close associates.