Ruling on agenda roils school board 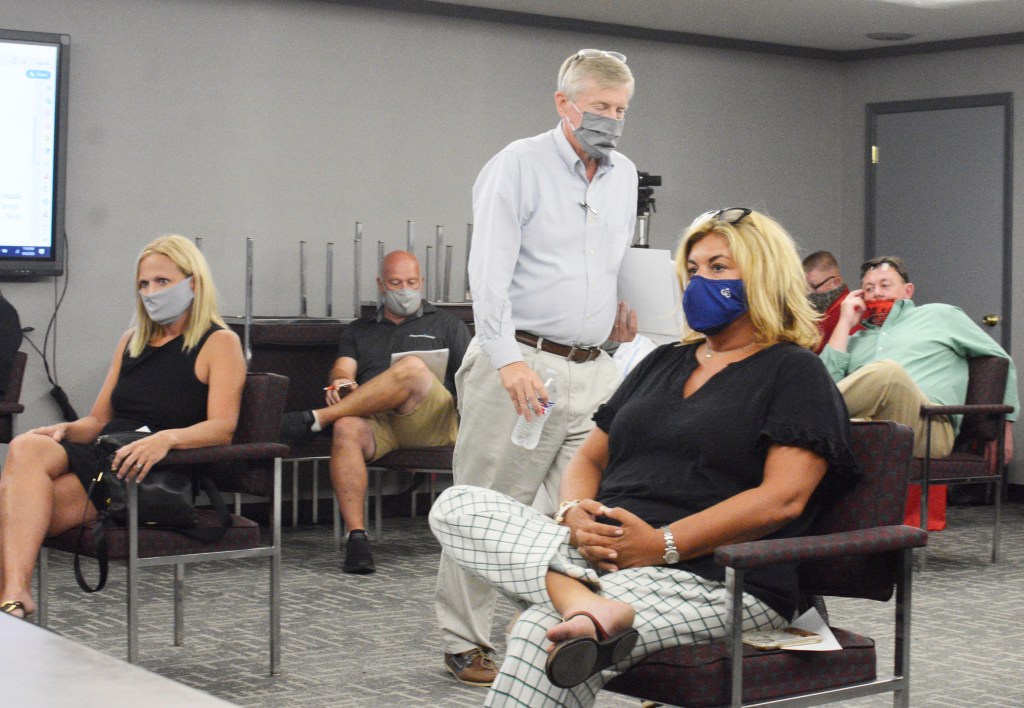 Gordon Parido walked out of a school board meeting Tuesday night after he and two other members were accused of trying to “hijack” the discussion to make it about resuming classes in person. (Photo by Randy Patrick)

The Clark County Board of Education’s meeting Tuesday was to have been about school sports, but the first hour was a clash over whether they should talk about opening the schools to in-person learning.

It got so heated that one member suggested removing the presiding officer and another gathered his things and walked out.

The trouble began when Board Member William Taulbee moved to strike an item for discussion and consideration of approval to begin the process of in-person learning for students, saying the late addition to the agenda was “out of order.”

Board Chair Ashley Ritchie granted the request, which she had the authority to do, according to the board’s attorney, Brian Thomas.

Board Members Sherry Richardson, Scott Hisle and Gordon Parido had placed the item on the agenda. Ritchie ruled it out of order, she said, because it conflicted with a previous decision in August for the first nine weeks of school to be distance learning, but to reconsider the matter again during the next regular board meeting, which will be Sept. 21.

“We want to know what the plans are. We have a fiduciary duty to represent the students, staff, parents,” Hisle said.

One of his concerns, he said, is that “a small number of students with particular needs” might do better in a classroom setting of 10 students or so, rather than learning from home by computer and internet.

“Right now, if the implication is that all we do is distance learning, that means we cannot have any students in our schools. I think we need to clarify that,” he said.

But the rules are the rules, Thomas said. They can’t be changed in a special meeting. An item can be removed from the agenda, but it can’t be modified.

Hisle had offered to change the wording so that members could discuss the issue without voting on a proposal.

“The way this is worded, you get the whole hog or no hog at all,” Thomas said, consulting “Robert’s Rules of Order,” the guide to conducting meetings.

Hisle suggested the board consult “Robert’s Rules” to determine how to remove the chair, which brought a rebuke by Ritchie.

“I don’t understand why we wouldn’t talk about it. That’s what we’re here for,” Richardson said.

Ritchie said she wasn’t saying she didn’t want to discuss the matter, only that it wasn’t the right time to do so, the very day students returned to classes online for the fall semester.

“Would it not be better to bring this back on another night and make it solely about this?” the chair asked.

“This meeting was for athletics review, and three members have tried to hijack it,” Taulbee said.

That drew an angry rebuttal from Parido.

“Mr. Hisle made this request,” and he never spoke with him about it, he said. “The attempt by people on here to make it seem like this is a coup” he said, was the “most ridiculous” and “unethical” thing he had ever witnessed during his time on the board.

It was unethical, he said, “to get on social media and say the things that have been said when we have not spoken to each other.”

Ritchie explained after the meeting that Parido was referring to a Facebook post she had taken down. She said she had been getting many questions about why the item was on the agenda, and she explained in her post that she wasn’t the one who had added it. She hadn’t said anything disparaging about the members, but there were some “nasty” comments by others, which was why she took it down.

“What we’re doing now is not school. It’s the best thing we can do without having school,” Parido said.

“Please make a ruling!” he demanded.

When Ritchie decided to strike the item, Parido said the other decision, about resuming sports, could be done without board approval, and the board didn’t need his input. Before he got up and left the meeting, though, he warned that he would “get legal action on this.”

Superintendent Paul Christy said the school district has a plan for returning to in-person and virtual classes, and each school has a plan, but there have been changes since it was first proposed.

Christy said he resented Parido’s insinuation that the 16-member committee that came up with the plan was something he put together how he wanted. It was a diverse panel made up of parents, students, teachers, administrators, school board members, doctors, public health experts and others with a diversity of views, and it was created at the direction of the board, he said.

After discussion of the agenda, the chair opened the meeting to public comment about the one item left on the agenda, the return of high school and middle school sports.

One of the three moms who spoke, Kelly Nisbet, used most of her time to scold the board.

Removing her mask to speak, she said she was “disappointed” by what she had witnessed.

She noted that the school district’s motto is “One Community; One Vision: Life Ready. Where Every Student Matters.”

“We’ve got to get through this together,” she said.