Our grandchildren had come for an overnight visit, and anytime they are at our house I try and have fresh fruit available so they have some healthy options, not just all the stuff I like to bake and cook.

I’d bought apples, bananas, peaches, plums, blueberries and strawberries. They did eat a few pieces of fruit, but they didn’t touch the Growing up, my Great Aunt Ruth, sister to my mom’s mother, lived right down the street from my grandmother.

Aunt Ruth had a plum tree in her front yard, and during the summer on Sunday afternoons, my cousins and I would go down the street to her house and pick plums.

Really, we were picking them up off the ground after they fell. I don’t remember if we volunteered to go pick up the fruit or if our Granny Tavie asked us to do it.

Either way, granny wanted plums so she could make plum jelly.

What I do remember was that those plums were the best things ever. They were so sweet and I looked forward to eating them every summer. They were one of my favorite summer fruits.

I was never crazy about the plum jelly, though. I preferred Granny’s homemade grape jelly made from the grapes in her backyard. And yes, us cousins picked those, too, but probably ate as many as we picked.

Enough reminiscing, back to the plum tart. Since I’d purchased a good variety of fruit for the grandkids, I’d only bought three plums — one for each kid or just enough for a half recipe of this tart.

Always the dessert lover, half a recipe is better than a whole recipe so I don’t over indulge.

I pulled a small Bybee Pottery baking dish from the cabinet and gathered the ingredients for this recipe that I’d found in the May 2009 issue of Redbook Magazine. 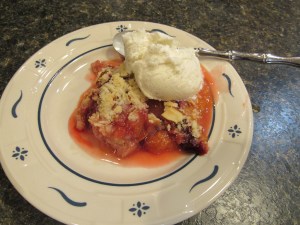 — 2 pounds plums, halved, pitted, and each cut into 6 wedges

Filling: Heat oven to 350 degrees. Toss plums, sugar and cinnamon sticks in an eight-inch-square baking dish. Arrange the mixture evenly in the dish, tucking cinnamon sticks beneath the plums.

Topping: Mix flour, sugar and oats in a medium bowl to blend. Using your fingers, work the butter into the flour mixture until moist clumps form. Mix in the almonds. Sprinkle crumb topping evenly over the plum mixture.

Bake 45 minutes or until juices are bubbling, fruit is tender, and topping is golden brown. Let stand at room temperature five minutes before serving.

I preheated the oven and then peeled and pitted the plums.

I cut each plum into six pieces and tossed them with sugar and a cinnamon stick.

I poured the mixture into my little baking dish, and made sure the cinnamon stick was on the bottom.

Then I started putting the topping together. I mixed the flour, sugar and oats together so the flour would not clump, and then added softened butter.

I used a fork to blend the ingredients then poured in the almonds. I didn’t bother chopping the almonds because I was using slivered ones.

I sprinkled the topping over the plum mixture and popped the baking dish into the oven.

Once the topping had slightly browned, which took about 45 minutes, I removed the crumble from the oven and could hardly wait to give it a try.

After waiting about 10 minutes, I asked Brad if he wanted to give it a try.

I scooped some into bowls for each of us and topped mine with vanilla ice cream.

I took a bite and really didn’t care for it because it was pretty tart, not like the sweet and juicy plums I remember from my childhood. I sure was glad I had ice cream on top.

Brad, on the other hand, liked this dessert because it was tart and not sweet.

The next day, I took a bite of the tart, thinking I would like it better cooled, but I didn’t.

I told Brad I thought the recipe was a failure and was going to throw the rest of it away. He said not to do that because he liked it and thought it was a nailed it recipe.

I guess this one is a toss-up.

I’ll have to say the recipe was easy to prepare. I guess I’ll have to keep it around just for Brad.

If I could just get more of Aunt Ruth’s plums (the tree was cut down several years ago) maybe I would have liked this crumble.