Before the pandemic, the Generations Center was a daily gathering place for seniors who were as hungry for companionship as for the hot meals they could get there. Because the elderly are more at risk for getting sick from the coronavirus, that’s no longer an option. But the meals are still available to anyone 60 years or older.

If they’re able to drive, Executive Director Diana Sims said, those who want the meals are asked to come by the senior center at 32 Meadow St. and pick them up at the door. They may do so Monday through Friday every day, but most of those who come by only come once a week and get a hot meal and a frozen meal for every other day of the week.

The majority of the 70 meals the agency distributes though, are delivered once a week by the staff — or twice a week for those who live far out in the country. They too get a hot meal and the rest frozen.

Many of those who used to come the the center don’t drive Sims explained. They were brought there on the Foothills Express buses. So now, they’re getting their meals at home because they have no other way.

“We’re definitely delivering more meals than at the time we closed down” in mid-March she said.

Sims said some of the seniors would be food-deprived if they didn’t have the meals.

There is a suggested donation of $1.50 per meal, but it’s only a suggestion. The food is paid for through federal and local government funds and private contributions.

The James B. Allen Jr. Generations Center is a service of the Kentucky River Foothills Development Council, the community action agency for the county. It was so named because the building originally housed the senior citizens center and Head Start for preschool children, though the Head Start program is no longer there.

Because of COVID, Sims said, the volunteers wear masks and gloves and try to not come close to the seniors if they can avoid it.

They either ring the doorbell and set the food down on the porch or hand it around the door. But that doesn’t work with some of them because they need more help or “they are lonely” and want someone to stay and talk, she said.

The director doesn’t know when the center might open again.

“There’s no discussion about it at this point, with the numbers what they are,” she said.

One of the residents Sims delivered to last Friday was Katherine Douglas, 87, who lives in Westwood off Fulton Road near the city’s bypass.

Sims was met at the door by the lady’s son, James Scott, who cares for her and makes sure she gets her meals.

“It helps quite a bit,” Scott said of the food. “We use almost every bit of it.”

What she doesn’t eat, he said, she gives to others.

More information about the Generations Center and the meals program is available by calling (859) 744-3235. 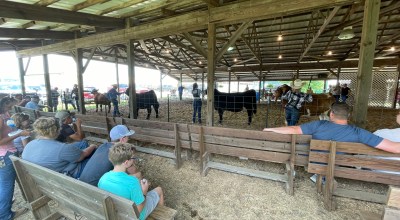