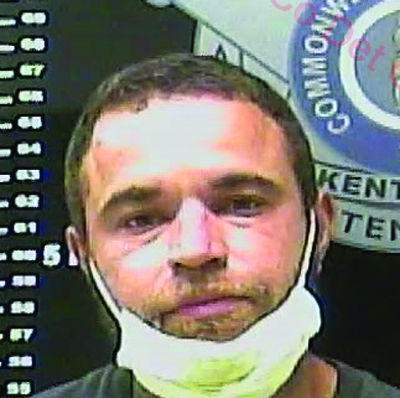 Arrest made after foot pursuit for stolen truck

A foot pursuit through downtown Winchester led to a Louisville man being arrested for multiple charges, including having a stolen truck.

Donnie Frye, 37, was charged after being captured following a three-block chase on foot from Lexington Avenue to Washington Street.

“One of our officers received a complaint of a person begging for money at Speedway,” Winchester Police Capt. Harvey Craycraft said.

The person, he said, was making threats to people if they did not give him money.

Officers arrived and started speaking with the man, and determined the pickup truck he had was reported stolen. At that point, the man, later identified as Frye, took off on foot running down Wall Street.

“He fled up Wall Alley to J&B Food Mart,” Craycraft said. “He fought with officers and wasn’t cooperative.”

Frye was taken to Clark Regional Medical Center after complaining of breathing issues, but was released. Before going into the jail, Frye reportedly said he had swallowed a bag of methamphetamine, but a subsequent X-ray at the hospital found nothing, Craycraft said.

During the investigation, officers also identified Frye as a suspect in a car burglary on Cross Brook Lane about 12 hours earlier where medication and cash were taken.

Kenny Blair isn’t a typical candidate for the state legislature. He isn’t a lawyer or businessman like many politicians, and... read more