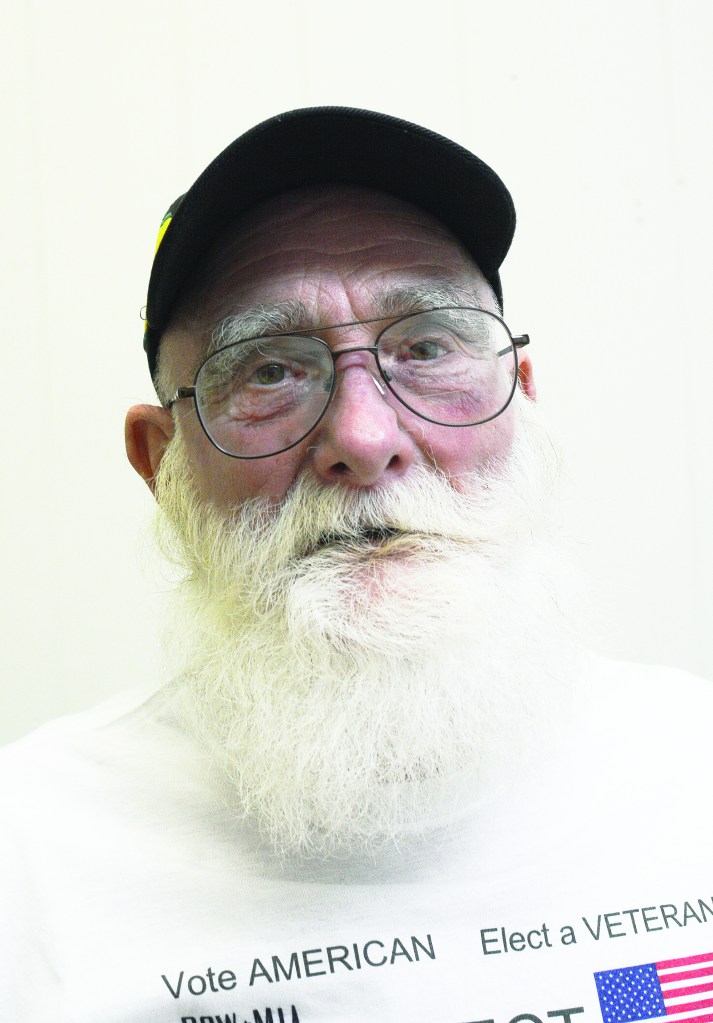 Kenny Blair isn’t a typical candidate for the state legislature.

He isn’t a lawyer or businessman like many politicians, and he has never held office before, though he has run before for the 73rd District House seat he is seeking now.

He is a Vietnam combat veteran, retired firefighter and five-string banjo player who can write and operate heavy equipment.

Before he earned an associate’s degree in fire science from Eastern Kentucky University, it looked as though he might become a teacher like his parents or a paralegal.

In the Navy, he deliberately failed three tests because he didn’t want to be a sonar operator; he wanted to be a draftsman.

“So they sent me to ‘Nam,” he said, seemingly amused by the twist of fate.

In civilian life, the former sailor is still making waves, advocating for people with disabilities like one of his grandsons.

If the voters send him to Frankfort, he said, he will fight for farmers, teachers and war veterans.

At 76, Blair is at an age when most lawmakers are thinking about retiring rather than serving their first term. But he believes he still has something to contribute.

One of his goals as a legislator, he said, would be to create a legal assistance fund for combat veterans who have grievances against the government.

He wants to protect public schoolteachers’ jobs and their defined-benefit pensions. And he wants to be a voice for family farmers, including Kentucky beef farmers who, he believes, have a hard time competing with Argentine cattle ranchers because of trade policy and over-regulation. Even if that’s a federal rather than a state issue, he said, state legislators can advocate for farmers and press Congress to favor American producers and alternative crops such as hemp.

Blair said he would like to see an end to political “polarization.”

“I’ll stand up for what I believe in … but we need to work together on the budget,” he said.

Blair said he thinks labels like “liberal” and “conservative” are divisive.

“I’ve been a Democrat since John F. Kennedy,” he said, and added that he liked what JFK did as president.

He doesn’t, however, like Joe Biden, this year’s Democratic nominee for president.

Blair said the Democratic establishment in Clark County didn’t support him because they expected Rory Houlihan to win, but Blair beat Houlihan and Pat Banks, who also ran for the seat before.

Blair said more people know his name than know him because he sued the city over his termination as a firefighter, and he has made YouTube videos.

“I find that people support me because of my honesty,” Blair said.

Blair said he doesn’t have any problem with same-sex marriage and thinks there should be a state fairness law for employment and housing.

The Democrat said he is pro-choice but is for limiting abortion to the first three or four months except when the mother’s life is threatened.

He also agrees that the state should make abortion easier and more affordable.

Blair believes Gov. Andy Beshear is doing the right thing by imposing public health restrictions to battle the coronavirus, and he should be able to do so without interference from other state officials.

“When somebody walks into Walmart or anywhere and they don’t have a mask on, they’re telling me, ‘I don’t give a damn about you,’” he said.

If elected, Blair said, he would like to serve on the House Education, Veterans and Agriculture committees.

Although he is from Winchester, he and his wife Mary now live just across the Kentucky River in Madison County.

After more than two decades, Gary Epperson retiring from…