Ah yes, the coronavirus has struck again. This time, it has impacted the possibility of cancelling Halloween in some areas of our country.

Some towns have already cancelled trick or treating, trunk or treats, haunted houses and other autumn festivals to ensure we meet compliance to COVID-19 health protocols. 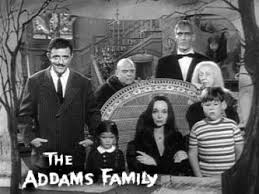 With the possibility of cancelling Halloween this year, some have already started decorating their house early in a sign of rebellion, designing DIY candy chutes to dispense candy to kids to ensure social distancing and minimize potential exposure.

With the possibility the powers that be could cancel this annual tradition, this fan of the holiday feels like we are waiting for the proverbial axe to drop.

Staying in theme, it was today back in 1964 that “The Addams Family” debuted on TV.

“The Addams Family” is the beloved black comedy sitcom focused on a unique, happy fictional, but functional family, the Addamses.

The patriarch, Gomez, portrayed by John “That Touch of Mink” Astin, is a wealthy die-hard positive enthusiast of life and family and madly in love with his beautiful gothic wife, Morticia, played by Carolyn “How the West Was Won” Jones.

The unique family is confronted with everyday situations of American families at the time dealing with PTAs, interacting with neighbors and other rather normal doldrums of our daily adult lives, but react to these normalities in a funny gallows humor way.

What else would you expect from a family that has a hand, “Thing,” bring the mail or answer the phone for the family, their Frankenstein’s monster meets ghoul butler/chauffeur Lurch (Ted “Butch Cassidy and the Sundance Kid” Cassidy), or their frequent visiting relative who was small in size but big in hair and laughs, Cousin It?

“The Addams Family” TV show was inspired by the original works of cartoonist Charles Addams, which originated in 1938 for the successful somewhat posh magazine, The New Yorker.

On the surface of “The Addams Family” it looks like a silly immature comedy that bases its formula of the repeated gag of just having the cast do the complete opposite of what “normal” American families would do in the episodic situation. If this is your assumption without viewing one of the 64 episodes which aired from 1964-66, I hate to say you have missed the mark.

The Addamses, no matter how eccentric, taught viewers that it is OK to embrace the inner child and celebrate your own uniqueness in a society that at times loves everything and everyone to be a product of a cookie cutter design.

Love your family and be warm and welcome to all you meet.

As dark and macabre some of the content may seem to be, the family was always welcoming to guests, neighbors and never harmed anyone in the show.

In fact, the family felt they had a civic duty to do their part and they were never heard talking ill of their neighbors. Their neighbors were the monsters as they gossiped, spied and looked down upon their fellow citizens, which happened to reside at 0001 Cemetery Lane.

In the time of growing divorce rates, the love between Gomez and Morticia is admirable and healthier than any other relationship I have seen on the screen or in real life except for my grandparents.

Stay ooky and kooky, and have a film-tastic day!