Board discusses return to school 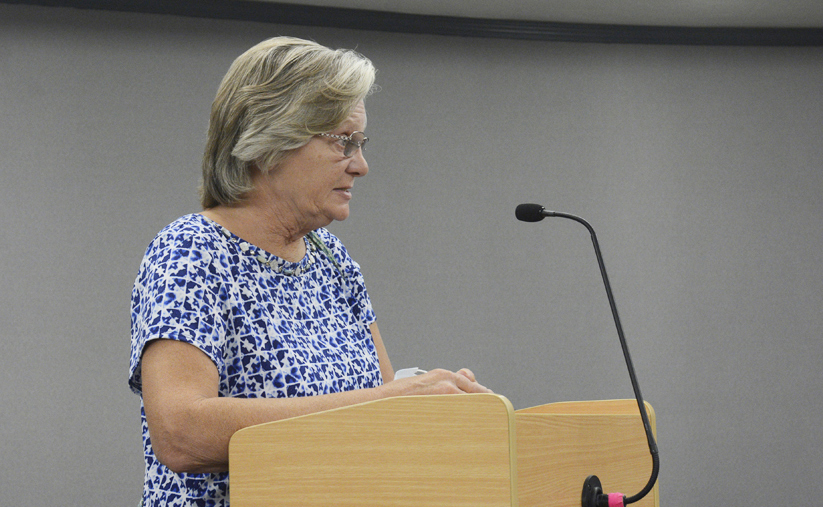 “This system is not working,” Eudessa Sharp, a grandmother, said, referring to distance learning. “Our kids are suffering for it.”

Clark County Board of Education members got a better understanding this week of what in-person learning might look like when students and teachers return to their classrooms.

The board called a special meeting Monday to hear from Superintendent Paul Christy and other school officials about their plans, ask questions and offer their input.

“I think we’re ready to open discussions about coming back,” Christy said.

The superintendent said the most likely scenario would be for schools to offer an “A-B hybrid plan” that would divide each school’s students into two groups. The A group would have in-person classes on Mondays and Tuesdays and online or virtual classes Wednesday, Thursday and Friday. The B group would do virtual classes Monday, Tuesday and Wednesday and in-person classes Thursday and Friday. The reason for having all students do virtual on Wednesdays would be to allow time to clean and disinfect the schools for the next group.

Christy emphasized this was a draft plan and subject to change.

The reason for having to divide the district’s 5,600 students’ time between virtual and classroom learning, Christy said, is the state’s social distancing requirements.

“As long as we have to maintain six feet of space between each student in the classroom, there is not enough room to bring back all of the students at once. It’s that simple,” he said.

The superintendent said each school’s available space for classes has been measured and calculated, and based on a survey of parents early in the year, an estimated 35 percent said they would opt for virtual learning only. That would be a possibility for any student whose parents choose it.

But with the six-foot distancing rule, there would not be enough classroom space for the remaining 65 percent of students to return at once.

“We’ve talked to 18 other districts, and the largest percentage of them that were coming back in person were doing the same thing” for the same reason, Christy said.

The superintendent said students would have their temperatures checked when they get on a bus and when they arrive at school.

Some districts also plan to test their students again in the middle of the day during lunch.

It was unclear to some whether the six-foot space rule is a requirement or a recommendation of the state.

But Board Member Scott Hisle, reading from the state guidelines, quoted: “If the physical space in the school does not allow for spacing the students’ desks six feet apart, space desks as far away as possible.”

Hisle suggested getting clarification on that point.

“That changes everything,” if it’s only a recommendation, he said.

Board Member Gordon Parido said that if the spacing isn’t six feet, some teachers will choose not to return.

The board met the same day the governor announced a requirement for school districts to report on a regular basis the number of students and employees who test positive and those in isolation or quarantine. The information will be on a state website.

Gov. Andy Beshear asked that schools that haven’t yet resumed in-person classes not do so until Sept. 28 or later, as that is the date the reporting must begin. But he also said he isn’t going to give any more recommendations about when students should return to classes. He would allow broad local control with guidance from local health departments.

Dr. Steven Stack, the state’s public health commissioner, clarified that would be the situation as long as fewer than 6 percent of a county’s coronavirus tests are positive and community hospitals have enough resources to handle cases.

The regulation also requires parents to notify school districts within 24 hours of their child testing positive for COVID-19.

The state will use a color-coded system for determining whether students should return to school. A county that averages less than one new coronavirus case per day for every 100,000 people is in the green category, and in-person school is encouraged. A county with one to 10 new cases a day for the same population is in yellow, and caution is urged. Up to 25 new cases per 100,000 is orange, the second highest category. Red is more than 25 new cases per the same population, and districts with numbers that high should close classes and put sports and other extracurricular activities on hold for at least a week.

Becky Kissick of the Clark County Public Health Department, said Wednesday this county is in the yellow category and has never been higher than yellow.

Christy said that getting students back in class by Sept. 28 would be “difficult.”

“I can tell you it’s going to take two or three weeks to go from where we are to being back in person,” he said.

One reason is working out the transportation, and another is getting the food ordered and delivered.

The new meals will be self-contained, and students will be handed condiments, eating utensils, drinks and napkins.

Students would eat breakfast in the classroom, but would eat lunch in the cafeteria or some other designated space.

The only time masks won’t be required is when the students are eating.

If a student refuses to wear a mask, they will get one warning. The second time, the parents will be asked to come and get the student, and they will be placed in the distance learning program, Christy said.

Also during the day, teachers or students who have a temperature of 100.4 must be sent home for 24 hours.

Parido pointed out that if a teacher has a temperature of 100.4, there would have to be a substitute to take her kids to class.

“Have you considered making them full-time?” he asked regarding substitute teachers.

Scarlett Ryan, director of human resources, said that would be a possibility to have a full-time sub assigned to each school if that’s what school officials want.

Hisle had opened the discussion by saying the board’s goal was to get students back into school as soon as possible and as safely as possible.

The superintendent’s remarks mirrored that sentiment toward the end of the meeting.

The easiest thing to do, he said, if the district finds itself in “a healthy enough situation,” would be for all families who want their children to return to class to be able to do so and all who want them to do virtual learning alone to do so.

“I’m for giving the parents choice,” Christy said. “That’s where I want to get to, but I want to make sure we follow the guidelines and do it safely.”

Christy said the district would be doing another survey of parents, and he hoped to have more information to present to a 16-member coronavirus response task force this week.

Some may return sooner

Also during the meeting all board members approved a proposal by Hisle to allow small groups of students to receive in-person instruction in school buildings during remote learning periods when students at large were not allowed to return.

Hisle had wanted to discuss allowing “very small groups of students with particular needs” in the schools by arrangement with their teachers, but the board couldn’t take it up then because of procedural rules.

During the Sept. 14 meeting, the board effected the change by voting to incorporate state-approved non-traditional instruction guidelines for the district into a plan to allow select students back into schools.

Board hears from public

A teacher, a mom and a grandmother expressed their thoughts on students returning to school during the Clark County Board of Education meeting Monday.

Erin Newton, a George Rogers Clark High School teacher, told the board it was important to follow public health guidelines in deciding when and how kids should be allowed back in the buildings.

“It’s good that we’re starting with a hybrid model. It helps with health concerns and creates a safer situation than a full-return model would,” she said, referring to a tentative plan to allow only half the students in at any one time while the other half learns online from home.

She asked the board to give families two or three weeks to transition from virtual learning to the hybrid model rather than doing it at once.

She also urged sticking to “the facts and figures” regarding social distancing in the classroom.

Newton commended teachers for adapting to virtual learning and said they had received “excellent training.”

“For many of us, COVID-19 was the final straw that pushed us to embrace the new technology,” she said.

But she was concerned that the schools didn’t have the internet capability they needed.

“Chromebooks are a step in the right direction, but what good are Chromebooks if the WiFi in the school won’t support half the kids logging into Google Classroom at the same time?” she asked.

Kim Smith, a working mother, said the online learning was “not user friendly.”

“I have a responsibility to my child,” she said, but added that she has had her work “taken away to stay with my child and do the things I was not trained for. I did what I could,” she said.

Eudessa Sharp, a grandmother who has child custody, called online learning “frustrating” because many people aren’t comfortable with it, and it’s hard to get technical support by phone.

“I’ve been on the phone all day today,” she mentioned.

Social isolation, she said, is hard on the kids, and they need to be with their friends.

“This system is not working,” she said. “Our kids are suffering for it.”

She said she understand COVID-19 is dangerous, but said parents should have a choice, and so should teachers.

“Let those teachers that don’t feel comfortable going back to school … do the virtual learning for those kids that are staying at home, and let our children that need to be out and back in school go back to school,” she suggested.