Sometimes life can literally sneak up on you. Most of you are thinking the coronavirus did just that this year.

However, what Royetta Stamper has dealt with, besides dealing with the coronavirus pandemic this year, has made me take a closer look at my petty complaints.

Though I had never personally met Royetta, I had been very aware of Royetta’s tall 6’6” husband. Most anyone living in Kentucky and who was a fan of University of Kentucky basketball was aware of him. 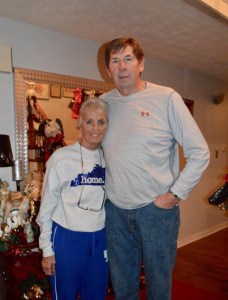 I have to say, once I met Royetta, I will never forget her.

Close to this time last year, Royetta, who likes to wear her hair in a ponytail, noticed she was having a really hard time being able to wrap the rubber band or elastic around her hair with her hand.

It became so bothersome she decided to go to a doctor. Three doctors later and a trip to the Cleveland Clinic, she learned on Oct. 15, 2019, she had ALS.

Six months later, she was in a wheel chair.

Royetta grew up in Ezel, Kentucky, with her parents, her older brother, Dean Rowland, and older sister, Teresa Rowland Salyers.

She told me the best advice her Mom and Dad ever gave her and that she has clung to all her life was: “Treat people the way you want to be treated.”

Her favorite childhood memory took place when her Papaw and Mamaw Roland loaded up her, her sister and brother in a pickup truck to take them fishing. She said they would jump off the truck and then chase the pickup truck. She admitted

she would not recommend this for kids to do today because it is dangerous.

Larry grew up in Beattyville. I asked Royetta if he was the reason she loved basketball so much and she said, “Oh no!” I went to the boys state tournament for 50 years.” I am sure there are few who can say they have done that.

When I asked her if she wanted Rupp Arena to keep it’s name. Her answer was adamant, “Absolutely! No question!”

I asked Royetta what has made her happiest in life, and she told me she felt she has done her purpose in life by being a teacher. She felt she has been a proponent in encouraging students to play ball and go on to college. She thinks sports are great because they make a difference in young people’s lives.

She gave Larry as an example. She said without basketball he probably would never have gone to college.

She also mentioned Bo Harris and Sandra Skinner. They are both very dear to Royetta.

I asked Royetta what advice she would give to a young person growing up that she wished she had taken. She told me she would have studied a little harder and had managed her time better especially her first year of college. I have a feeling there are many people who would agree this is great advice to give a young person or wish they had done the same.

We also discussed whether she thought our country could return the way it used to be after the coronavirus pandemic, and she said, “No, because I think the damage has already been done.”

Royetta has had plenty of schooling. She graduated from Morehead then worked for 13 years at Morgan County High teaching home economics. She taught night classes at Morehead State University for seven years.

She got another degree after 13 years of teaching. She took another 45 hours at Morehead to get a degree to teach special needs children.

Royetta was called in to teach. She taught the English part and Shanda Crosby did the newspaper part. She said this was one reason Shanda decided to change her job to begin teaching.

It was because of that dual row of working together that they were the first ones to do the collaboration with the special needs students. This was a first to ever be for GRC.

Royetta would teach for 28 years to special needs students.

She fell in love with GRC sports and the girl’s and boy’s basketball team.

As most people know, the students and teachers fell in love with her also.

She had two things on her bucket list she wanted accomplished when she first found out she had ALS.

Her second bucket list wish was that both the girl’s and boy’s basketball teams would go to the state tournament. Thank God she got her wishes.

Royetta and her dear teacher friend, Nancy Wills, were dressed and on their way to go to the girl’s state tournament to cheer them on when they got the call that no more ballgames would be played this year because of the coronavirus pandemic that hit our state in March. This was a sad blow for Royetta who had looked forward to cheering them on.

Royetta was chosen as GRC’s No. 1 sports fan. She never missed a game during the tournaments though she never really felt up to going.

Nancy told me she had basketball boyfriends who took care of her every wish bringing her something to drink or unwrapping candy for her. These two special guys are Larry Curtis and Mark Davidson.

Royetta told me how Nancy comes to visit her every week and stays about three hours with her — a true friend that she appreciates so much.

Royetta had a love for gardening and planting flowers. She told me working in them gave her peace. Her flowers were evident of her love as you walk up to her door.

Royetta is now having to depend on a caretaker to help with her every move as the ALS is taking over her body, but I see a woman who still exudes love and appreciation for others.

I know something I wished as I visited with her and that is I wish I had gotten to know Royetta sooner.

I want to thank my friend, Judy Adams, Royetta’s caretaker, for telling me about her. I wish Royetta all the best.

Sue Staton is a Clark County native. She is a wife, mother and grandmother.

STATON: Discipline and living by the 10 Commandments would go a long way in the U.S.

I have seen the demise of respectful behavior from many children since spanking was taken out of our schools and... read more