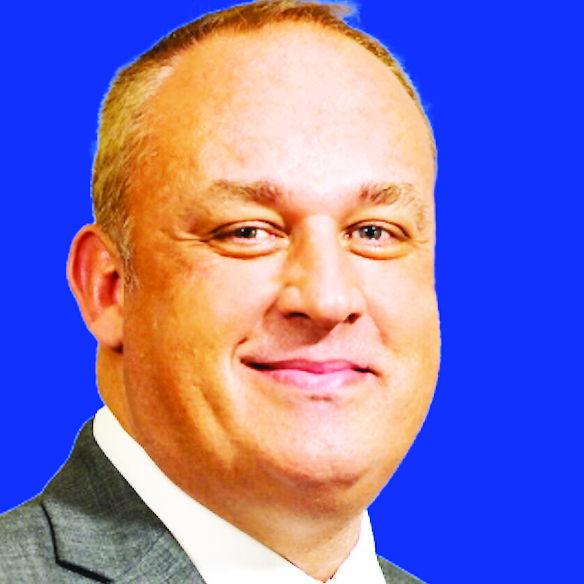 For Ryan Dotson, politics is a kind of Christian mission.

The 47-year-old Pentecostal preacher said he’s a Republican candidate for the 73rd District House seat in the Kentucky legislature because he wants to serve others in another way.

“I’ve been in the trenches of Clark County for the last 24 years trying to help and serve,” Dotson said. “Ministry is not what I do, it’s who I am, and the political arena is just an extension of whom I am. It’s part of my wanting to serve and give back and be involved.”

This campaign isn’t Dotson’s first. In 2010, he ran against then Senate Minority Floor Leader R.J. Palmer in the Democratic primary for the 28th District seat now held by Republican Ralph Alvarado of Winchester. And he ran for county judge-executive as a Republican in 2014.

Dotson has lived in Clark County for 28 years. The son of an Eastern Kentucky coal miner, he was born in Pikeville, graduated from Phelps High School, attended a community college in West Virginia for two years, enlisted in the Army and lived in Germany for a while, and worked in radiology at the University of Kentucky’s Chandler Medical Center when he got out of the military. But he didn’t want to live in Lexington, so he chose Winchester. He’s been here ever since.

Dotson is pastor of Lighthouse World Mission and a businessman who made some money in the real estate business and now owns restaurants in Winchester, Mount Sterling, Lexington and Somerset, as well as a day care.

He and his wife, Tresa, have two daughters in their 20s, Shea and Shana, and three grandchildren.

Growing up in Pike County, among “God-fearing Democrats,” it was “natural,” Dotson said, that would belong to the party of Andrew Jackson and Harry Truman. But, echoing the words of Ronald Reagan, he said, the Democratic Party left him.

“It just seemed like it began to drift too far left for me,” so about eight years ago, he switched, he said.

Dotson is a social conservative, and he pointed out he has the endorsements of Kentucky Right to Life, the National Rifle Association, the Commonwealth Policy Center and the Madison County Fraternal Order of Police.

He has also been endorsed by Alvarado and Donna Mayfield, the former state representative for his district.

“As a Christian, and looking at the state of the United States of America right now, I see a lot of moral decline,” Dotson said. “There’s no respect for police officers anymore. God has been taken out of so many things. And it’s my personal conviction to want to make a stand for the Christian voices.”

Part of that is being against abortion, which he considers the taking of “human lives.” He said he is for making late-term abortion illegal, and for keeping abortion clinics out of Kentucky.

But it is on the issue of lesbian, gay, bisexual and transgender (LGBT+) rights that he has come under the most criticism.

Same-sex marriage is now the law, but Dotson said he is a “believer in the biblical definition of marriage.”

Dotson was supposed to have officiated the wedding of Brittany Cartwright and Jax Taylor of the reality TV show “Vanderpump Rules,” but that changed after people noticed on social media that Dotson had made statements some considered homophobic.

“People know where I stand,” he said when asked about the controversy.

Dotson said he supports a statewide fairness law to prohibit discrimination against LGBT+ people in employment and housing as long as it’s written in a way that protects people’s religious freedoms. He does not, for example, think the Lexington T-shirt company Hands On Originals should have to print T-shirts with messages celebrating a gay pride parade.

On another contentious issue, he said he at first applauded Gov. Andy Beshear for issuing executive orders to protect public health at the beginning of the pandemic, but now thinks he’s gone too far. It bothered him that an abortion clinic could remain open while his mother could not go to the hospital for back surgery. He called the governor’s early restrictions on worship services an “attack against the churches,” and said Beshear should have convened the legislature into session, but instead, he didn’t even consult his own party’s caucus. The governor’s emergency powers need to be checked, he said.

“When we go back into session in January, those are some of the issues that will be addressed,” he said.

He said he supports teachers’ defined benefit pensions because “promises were made to those teachers, and they need to be kept.”

He said he won’t know whether he supports the changes Republicans made to tax policy until he has studied the impact they have had.

Dotson said that if he’s elected, he would work for local improvements, such as finishing the “long overdue” bypass around Winchester and would be “a catalyst to bring new industry to Clark County.”

“We need to make Kentucky more business-friendly … and bring industry and jobs to our community,” he said.

He would like to serve on the Economic Development and Workforce Investment Committee and the Health and Family Services Committee.