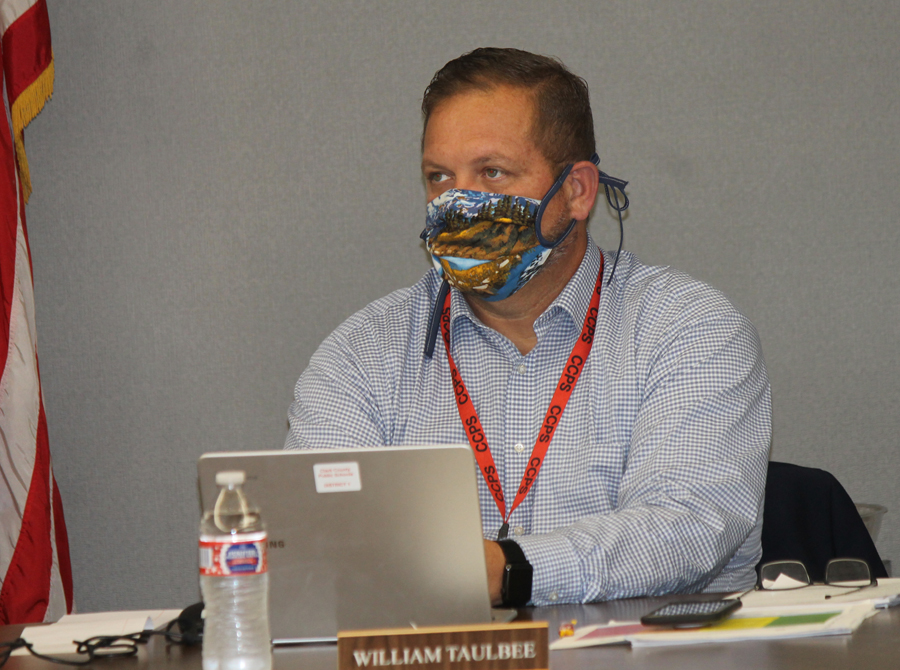 Clark County Board of Education Member Bill Taulbee during another meeting earlier this year.

That had been his proposal on Aug. 10, which the school board approved: that the first nine weeks of classes be virtual, with the condition that the decision be reconsidered Sept. 21 based on the seriousness of the coronavirus threat. But when that date came around Monday, he had not changed his mind.

“My recommendation right now is that we remain on virtual for the remainder of the nine weeks,” Christy told the board Monday.

The nine weeks ends Oct. 29, and if the situation has improved enough by then, he said, half of those students whose parents opt for in-person instruction could come back the next day, and the other half the following Monday.

He has suggested the “A-B hybrid” model with students alternating virtual and in-person learning because there isn’t enough space to meet the six-foot distancing requirement without it.

Christy said he wants to continue distance learning for now for several reasons, including the high infection rate for COVID-19, the need to give teachers time to enough for the transition, and because it is what a task force that includes parents, doctors, educators and others concluded.

“This is along the lines of what they recommended,” he said.

However, the superintendent agreed with Scott Hisle and other board members who want to start bringing students who need more attention back in small numbers for one-on-one or small group instruction.

That has already begun. Last week, Christy said, there were about 150 students in the schools, and that number will gradually increase.

“I want to do that in a way that is as safe for the students and the teachers as is possible, but we want to kind of slow roll it … and see if we can’t grow those numbers,” he said.

During the public comment period at the beginning of the meeting, teachers, parents, a student and a physician urged school officials to make the well-being of students and employees a priority.

“We want to return to our jobs,” said seventh-grade teacher Kiley Jones. “But we need some protection as well.”

Holly Withrow, also a teacher at Robert D. Campbell Junior High School, said she has sat at home and cried because she misses her students, but she would not want them to return to class the way things are now.

Everybody wants school to return to normal, but it isn’t going to be normal.

Kids won’t get to have breakfast in the cafeteria, use the gym or library or have any social time with their friends. They will wear masks, go to their assigned seats and sit there all day. Because the schools want to go paperless to cut down on the risk of spreading the virus, they will work on their Chromebooks all day, but teachers won’t be able to come close.

“It’s essentially what they’re doing now, but there will be a teacher over on the side,” she said.

“We will still be doing virtual learning,” but “in person,” she said.

Lexi Harris, another junior high teacher, said some teachers are being asked to make sacrifices that aren’t necessary at this time.

Dr. Beth Griffith, a pediatrician and member of the district’s COVID-19 Task Force, said the group’s proposal is that students return to classes as soon as possible, as long as it’s safe to do so, but it there is no definition of what safe is.

Pamela Ventura, a nurse, appearing with her oldest daughter, a high school student, asked the board to resume in-person learning.

Her younger children, including one who is dyslexic, are suffering by having to stay at home, she said, and her older daughter is their teacher.

“I just want them to be back in school,” she said.

Her daughter, 15, said she knows “a lot of kids who are failing now who were fine before.”

Teresa Daniels, director of infection prevention at Clark Regional Medical Center and chair of the task force, talked about the criteria the group would like to see for returning to classes. One is a statewide positivity rate for the virus of 6 percent or less for 21 days. Another is the consideration of the state’s seven-day incidence rate by county.

They would like to see three weeks of a downward trend in viral infections, completion of school return plans, having enough teachers willing to return and having enough time for the teachers to prepare, she said.

Daniels said the state has been at a positivity rate of less than 6 percent for about two weeks.

“I think our state is starting to reach a plateau,” she said.

As of Monday, there had been 408 COVID-19 cases confirmed in Clark County.

Board Chair Ashley Ritchie said she had received an email earlier in the day from a concerned parent informing her that “numerous” teachers in one of the schools were quarantined because of the virus.

Brian Thomas, the school board’s attorney, said there are currently 13 Clark County educators who are self-isolated or quarantined, but the district cannot make their identities known.

Christy said 97 percent of teachers have said they would return to classrooms, although they have concerns.

Gordon Parido, a board member, also wants to know how many students would return to classes in person in order to be able to plan for the return.

“We have to have solid numbers,” he said, in order to prepare “an instructional model that’s going to work.”

In a survey months ago, about 35 percent of parents said they would opt for virtual learning, but Christy is working to get more current numbers.

Parido also said he has heard from parents who are concerned about the board wanting their children to go back to school when they feel it’s unsafe, but that is a decision of the superintendent and instructional staff, he said. The board has responsibility regarding finances and policy, but it can’t get “deep in the weeds” on how and when students return to classes, he said.

Christy said that virtual learning is working, and participation among students is high. Currently, it’s at 97.4 percent, he said, whereas normally this time of year, it would be about 94 percent to 95 percent of students attending.

He said teachers have been training for more than a month on digital instruction, and have only been instructing students in that way for less than two weeks. Virtual classes began Sept. 8.

“Academically, I think we’re in a better place than a lot of places are right now, and I truly believe that,” he said.

A Q&A with Sen. Mitch McConnell and Amy McGrath