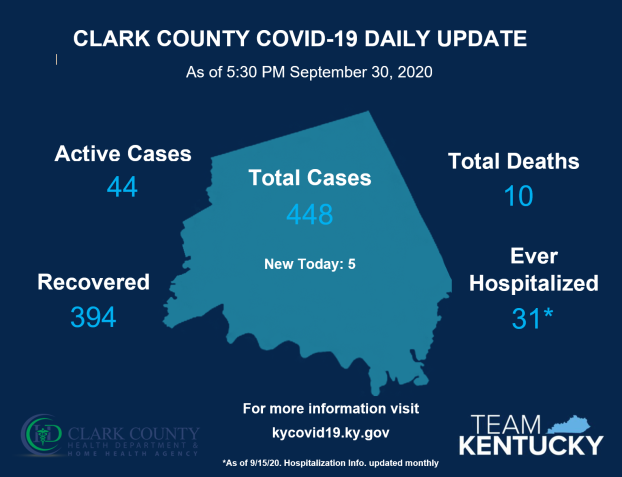 A second person in Clark County has died this week from complications of the coronavirus.

“Our thoughts are with the family as they mourn the loss of a … mother, wife and friend,” Public Health Director Rebecca Kissick wrote in an email Wednesday.

This is the 10th death attributed to the virus in Clark County.

Another death involving a 29-year-old was reported earlier this week. Prior to that, a death hadn’t been reported since Aug. 19.

Of the local deaths, three have involved general community members and seven have involved patients at Fountain Circle, a long-term care facility in Clark County.

As of Wednesday evening’s local daily COVID update, there had been 448 cases reported in the county. Of those, 44 were active and 394 had recovered.

As of Sept. 15, there had been 31 local cases that required hospitalization.

“People with COVID-19 have had a wide range of reported symptoms – ranging from mild symptoms to severe illness,” Kissick wrote in the email. “These include fever or chills, cough, shortness of breath or difficulty breathing, fatigue, muscle or body aches, headache, new loss of taste or smell, sore throat, congestion or runny nose, nausea or vomiting and diarrhea.”

Symptoms may appear two to 14 days after a person is exposed to the virus that causes COVID-19, she said.

Statewide, there had been 68,840 cases of the virus reported as of Wednesday evening’s daily briefing from Gov. Andy Beshear.

More than 1,000 of those cases were newly reported Wednesday, which marked two consecutive days of more than 1,000 new cases, Beshear said.

Of those newly reported Wednesday, 154 involved children. The youngest was only 4 months.

“Today’s report is a little tough. It’s the first time since March 6 that we’ve had over 1,000 cases in two consecutive days,” Beshear said. “One thousand four cases is a problem and that means we have to be more vigilant.”

There have been 1,174 deaths attributed to the virus in the state.

As of Wednesday, there have been at least 1,459,816 coronavirus tests performed in Kentucky. The positivity rate was 4.07 percent, and at least 11,840 Kentuckians have recovered from the virus.

The Clark County Board of Education approved a $56.7 million spending plan Monday that includes the use of $2.3 million... read more