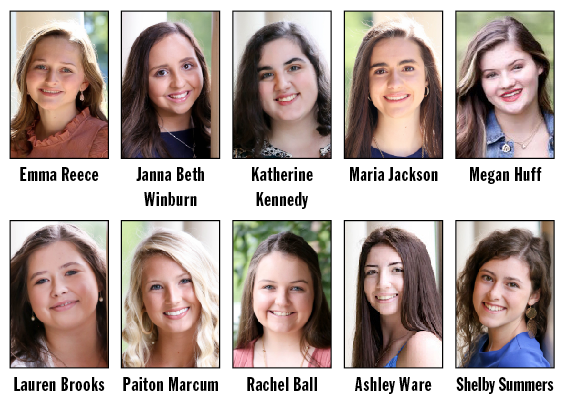 Ten local seniors will compete for the title of the 2021 Clark County Distinguished Young Woman Saturday. (Photos by Kasey Moore)

COVID-19 couldn’t stop the local Distinguished Young Woman committee and 10 local girls from “being their best selves,” and that means that despite some changes and restrictions, a local contest will take place this weekend.

There won’t be a packed house because the general public won’t be allowed to attend the contest, but DYW Committee Chairwoman Donna Fuller said the group of girls have adapted well to the necessary changes.

“We had to cut back a lot because the girls haven’t been able to practice together and we can’t have a big crowd in the audience,” Fuller said. “But we were determined that these young ladies would have the experience of the program as much as we could.”

On Saturday, the girls will take part in four rounds of competition — interview, self expression, talent and fitness. The winner will go on to compete in the state contest, which typically takes place in January in Lexington.

— MARIA JACKSON, the daughter of Ron and Melody Jackson. She will perform on the piano for talent.

— EMMA REECE, the daughter of Todd and Lisa Reece. She will perform a lyrical dance.

— LAUREN BROOKS, the daughter of Chuck and Heather Brooks. She will perform a flag routine.

— SHELBY SUMMERS, the daughter of Robert and Wendy Summers. She will perform a lyrical dance.

— JANNA BETH WINBURN, the daughter of Jack and Jennifer Winburn. She will clog for talent.

— MEGAN HUFF, the daughter of Bret and Tammy Huff. She will perform a contemporary dance.

— RACHEL BALL, the daughter of Brian and Sherry Ball. She will perform an American Sign Language interpretation.

— KATHERINE KENNEDY, the daughter of Kevin and Lynn Kennedy. She will perform a lyrical dance.

— ASHLEY WARE, the daughter of Crystal Kirk and Shane Ware. She will perform vocals.

— PAITON MARCUM, the daughter of Gary and Jama Marcum. She will perform on the piano.

Each year, thousands of dollars of scholarship money is awarded to local contestants, and much of that money is raised through ticket sales, so the committee had to get creative to find a way to fund the scholarships.

“Because we knew we would be losing about $2,000 in ticket sales, we decided to have an online auction,” Fuller said. “We’ve been overwhelmed with the response. It’s so humbling to see the support from the community and even from some people out of town.”

The auction closes at midnight Friday, and items can be viewed and bid on on Facebook at “Distinguished Young Women of Clark County Auction.”

“They may not have an audience, but they will have scholarships,” Fuller said.

This year’s theme is all about being resilient in difficult times.

“We chose the theme ‘Be The Light,’” Fuller said. “In this year of darkness of COVID, these girls are going to be the light.”

And they have been, Fuller said.

“My word for this class has been ‘re,’ for reinvent and remarkable,” Fuller said. “Any time we’ve had to make a change or cancel a practice, they have adapted to anything we’ve handed them. They have been so accommodating.”

Fuller said the contestants said participating offers them a little normalcy in a difficult time.

“And this was the first normalcy that they’ve had in awhile,” she said.

Fuller said portions of the contest, including the announcement of winners, will be recorded and posted on the Clark County Distinguished Young Woman Facebook page.

The Clark County Board of Education approved a $56.7 million spending plan Monday that includes the use of $2.3 million... read more