BALDWIN: Life lessons presented by Hitchcock and ‘The Twilight Zone’

To know the world, you must know yourself first.

In our current climate of social media communication conglomerate control pushing political correctness and political agenda, it seems we are divided as a human race and labeled right, left, black or white, and no matter what group with which you allow yourself to be identified, you are deemed to be right, wrong, good or bad, depending on who is talking the loudest.

At the end of the day, human beings are or have been all of these at one time or another in their existence, even you.

Famed author Robert Louis Stevenson wrote about the duality of human nature in the classic “Strange Case of Dr Jekyll and Mr. Hyde.”

Stevenson described, through a gripping tale, a transformation that every single human being has good and evil within them, but it is up to you on how you behave and the decisions you make. 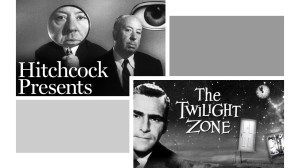 Our decisions and the consequences of choosing good versus bad have been a staple within our psyches since we were children.

Today marks the original anniversary of two classic TV shows airing that are still popular today and are narrative analysis on the nature of mankind.

“Alfred Hitchcock Presents” (1959-65) was the mystery melodrama anthology series that was hosted by the title’s namesake who was then known as the Master of Suspense several years before his most famous film, “Psycho” (1960) shocked the world.

Hitch’s show opening was simple, with his caricature shape on the screen, which the filmmaking host would walk into so his profile filled out the image serenading the scene with the eerie but melodic, “Funeral March of Marionette” theme welcoming the viewer.

This was an effective intro to a half hour of twisted tales that were introduced, interrupted and finalized with Hitch bumpers full of his deadpan macabre sense of humor.

Though he only directed 17 of the episodes over the decade, the episodes were gnarly tales full of twists and revealed the truths of this world that sometimes the bad guy gets away with murder.

The lessons taught were that no matter what good you are or how you play by the rules, you are prey to the evils of your fellow man, which prevails from time to time. Always a good time if you are in the mood for a quirky crime or just to hear Hitch say, “Good eeeveeening.”

“The Twilight Zone” (1959-64) was the weekly short non-serialized anthology drama with each episode masked with a horror, science-fi or the supernatural while it addressed serious issues and behavioral deficiencies with humanity.

Controversial issues such as racism, war, paranoia and civil ignorance snuck by the studio and sponsors through a clever cloak of writing, which appeared to resonate in a realm of reality and fantasy.

The suits and the squares saw a popular show laden in fantasy, while the observant viewer walked away entertained with that week’s tale and a lesson learned from the subvert commentary.

Rod Serling wasn’t just the cigarette-smoking narrator who led us to a dimension beyond what we could see, hear and touch. Serling was also the creator, head writer, producer and our moral compass that led us through this world of fantastic flaws and truth about ourselves.

Serling, a World War II combat veteran who was scared physically and mentally from the war, found therapy in feverishly writing 99 of the episodes that would be his social commentary to identify and fight the horrors that were birthed from within our intellects, or lack thereof.

“The Twilight Zone” is lauded as one of the best TV shows ever made, and this is since the written word spoke the truth that generated a genuine voice that still rings true today.

Revisit these classic quality shows that still entertain, awaken us to our dual nature and reveal that what the world needed then and now is empathy and understanding towards your neighbor.

Strive to be a good human and have a film-tastic day.