I wanted something easy to prepare for supper since we are having a really good year for green beans in our garden.

After picking the beans, breaking them, washing them and getting them ready to can, I’m not in the mood to start cooking supper.

So, when I flipped to this recipe while thumbing through my stash of chicken recipes, this went on the menu.

It also went on the menu because I had all of the ingredients.

I’d torn the recipe from the top corner of a page in a magazine, and there was no mention of the magazine or what year it appeared so there is no way to give credit to the author. 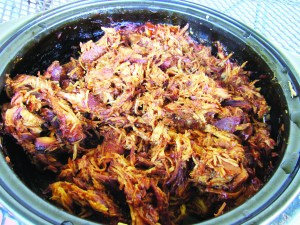 Remove chicken to a cutting board and shred with two forks. In a small bowl, mix cornstarch and chicken broth. Stir into sauce in slow cooker, cover and cook until sauce is thickened and heated through, five to 10 minutes.

Return chicken to cooker, stir, cover and continue cooking on low for 45 minutes.

Serve chicken on whole-grain buns, over brown rice or with baked potatoes if you like.

After I cleaned the chicken, this recipe went together quickly.

I placed the chicken in the Crock Pot, then mixed the barbecue sauce, Italian dressing, brown sugar and Worcestershire sauce in a bowl.

Once the liquids were in the bowl, I gave them a good stir and poured the mixture over the chicken.  I lifted each piece of chicken to get the sauce underneath.

I turned on the Crock Pot, and got busy canning more beans.

After five hours of smelling the chicken cook, I was ready to open up the pot and remove the chicken.

I placed each piece in a bowl and used two forks to shred it — so simple.

Next, all I had to do was combine the cornstarch and chicken broth, mix well and then add to the remaining sauce in the crock pot.

I let it simmer a few minutes to thicken, then dumped the shredded chicken back into the pot.

There didn’t seem to be that much barbecue sauce in the pan, but it did coat the chicken pretty well.

The recipe said to let it continue cooking for 45 minutes, but I only let it cook an additional 30 minutes because I was afraid the chicken might get tough.

I put everything on the table, and we sat down for supper.  Brad said a prayer, and we began to eat.

The chicken was so tender and good, it was hard to stop eating it.

Brad put it on top of his baked potato (one of the serving suggestions that accompanied the recipe) and he thought it was great.

Another serving suggestion was to put the barbecue chicken on tacos, and as we finished our meal, I mentioned that I thought it would be really good on BBQ chicken pizza (one of my favorites).

I have to tell you, this is a winner in my book and has been added to my nailed it recipes in my self-made cookbook.

We had enough chicken  left over for another meal, and we are trying to decide if we want to just eat it, make a pizza with it or make tacos.

Since Brad’s retired and has supper ready when I get home, I’ll let him surprise me.

I was in the mood to bake, and thought I could come up with something with the ingredients I have... read more