CONDLEY: A little fate was involved in this nailed it recipe

Growing up, we spent a lot of time on the Kentucky River.

At first, we did a lot of camping at Fort Boonesborough State Park. After that, my parents bought a house boat and we spent our weekends on the Kentucky River.

It was a setting that lent itself to making a lot of friends.

Several years ago, my mom gave me a cookbook titled “Kentucky River Recipes.”

It was given to my mom by Betty Farley of Boonesborough, Kentucky.

Betty and her husband owned a houseboat that stayed parked at my dad’s boat dock. Betty had put the 5- by 7-inch cookbook together using recipes from her friends.

There is a recipe in the cookbook that is one of our favorites: chicken casserole with cornbread. Yum!

I knew we were going to have this chicken casserole for supper, and when I placed the small cookbook on the counter, by chance, it fell open to today’s recipe for Broccoli Supreme.

I read over the recipe, and since I had all of the ingredients on hand, and because it didn’t call for cheese, I decided to give it a try. 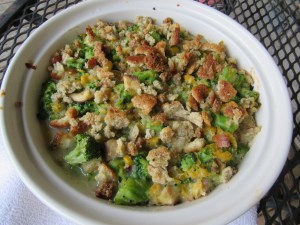 In a small pan, melt butter and add stuffing mix, tossing to coat.

I didn’t have frozen chopped broccoli, but I did have some steam-in-bag broccoli florets in the freezer.

It was too late to let the broccoli thaw, so I just heated it in the microwave for about a minute and a half and it was partially thawed.

I cracked the egg into a medium-size bowl and gave it a little beating then poured in the broccoli.

I can’t find those 8-1/2-ounce cans of creamed corn anymore, but I had a normal size can in the cabinet and just poured what I needed into the bowl with the egg and broccoli.

I sprinkled in the salt and pepper and gave the mixture a toss.

I sat the bowl aside while I melted the butter in a small saucepan.

Once the butter was melted, I added the stuffing mix and stirred until it was well coated with the butter.

I added 3/4 cup of the stuffing mixture to the vegetables and then poured that mixture into a 1-quart casserole dish.

I sprinkled the remaining stuffing mixture on top and popped the whole thing into the oven.

After 40 minutes, the chicken casserole and the broccoli supreme were both ready and we sat down to eat.

Brad prayed, thanking God for the cooler temperatures, and for all the ways he has blessed us, including the meal we were about to eat.

We both scooped out chicken casserole on our plates first because we love it so much.  Then we served ourselves some of the broccoli supreme.

After a few bites of chicken, I dug into the veggies.  Wow! I really liked it.

It was more broccoli than corn, and I liked the crunch of the stuffing on top.

Brad thought it was good, but said he thought it should have cooked a bit longer because it was a little runny.

After cleaning our plates, we were both stuffed.

There enough chicken casserole remaining in the pan (probably enough for two more meals) and there was still half of the vegetables left over, so we knew what we were having for supper the next night.

We enjoy leftovers. They make the next night’s meal really easy to get on the table.

The next night, Brad had everything ready when I got home from work and we sat down to eat.

After a prayer, we helped ourselves to the food.  Again, everything tasted great.

Brad thought the broccoli supreme was better the second time around and I thought it still tasted great.

This recipe is a definite nailed it and will have a place in my self-made cookbook.

Wonder what other little hidden gems are lurking in that small cookbook put together so many years ago by Mrs. Farley? I guess I’ll have to read through it again and see.

I wanted something easy to prepare for supper since we are having a really good year for green beans in... read more