BALDWIN: ‘The Shining’ and ‘Psycho’ coming to screens near you

Greetings my fellow weary travelers and cinephiles of Winchester.

I travel a lot. Though it keeps me on the go and at times by myself for the most part, I do enjoy the sights, sounds and experience of travel.

I agree with Saint Augustine that “the world is a book and those who do not travel read only page one.”

The more one travels, the more one grows and is exposed to life outside of their comfort zone and other points of view on the art of living.

With travel there is a time to rest. Where you lay your head is a vital proponent that will either make your trip an overall success or could ruin it. Hotel, motel, Airbnb, Wigwam — there are many choices for you to ponder.

They all have their pros and cons. It comes down to what you are looking for in an accommodation.

Quality, character and safety are all areas that should be considered.

Today’s films to be presented by Fathom Events with Turner Classic Movies are top quality, full of character, but not safe to say the least. 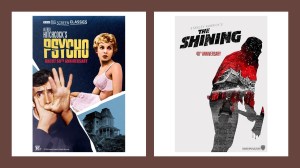 Alfred Hitchcock’s “Psycho” (1960) is a thriller focused on Marion Crane, portrayed by Janet “Touch of Evil” Leigh who’s on the run after stealing $40,000 from her employer to flee with her lover. Marion stops for the night at the isolated Bates Motel and meets the awkward Oedipal proprietor, Norman Bates.

Sixty years later, “Psycho” is still lauded by fans and critics as one of the most shocking films of all time.

“Psycho” was groundbreaking, inspiring to young filmmakers and changed the genre forever.

“Psycho” has gone on to become a pop cultural phenomenon, referenced time and time again and everyone knows the music or the shower scene even if they haven’t seen the movie.

If you haven’t seen it, don’t be a psycho and go see it. You don’t know what you’re missing.

“Psycho” will be screened tonight at the Cinemark at Richmond Centre and Fayette Mall at 7 p.m. sharp.

Speaking of sharp and psychos, “The Shining” (1980) is the horror yarn featuring recovering alcoholic Jack Torrance, portrayed by Jack “The Terror” Nicholson, who accepts a job as the winter caretaker for the Overlook Hotel deep in the Rocky Mountains.

Jack anticipates the isolation to this seasonal job so he can focus on his writing and reconnect with his wife, Shelly “Popeye” Duvall, and young son, Danny, who is discovered to have psychic abilities.

Before you know it, the first blizzard of the year blocks the road, snow hits the fan and the evil history of the hotel possesses Jack and drives him insane.

A classic screen adaptation by Stanley “A Clockwork Orange” Kubrick on the blockbuster horror novel of the same title by prolific, Stephen “It” King, “The Shining” will be shining on screens at the Cinemark at Richmond Centre and Fayette Mall Oct. 17 with showtimes at 4 p.m. and 7:30 p.m.

It should be a killer time.

So, my fellow road warriors, next time you are travelling for business or pleasure, make sure you really pay attention to the accommodations that you frequent and remember that safety is your top priority.

If not, you may check in and never check out.

On Sept. 25, the Leeds Center for the Arts and editor Rebecca Campomanes digitally released volume 1, issue 1 of... read more