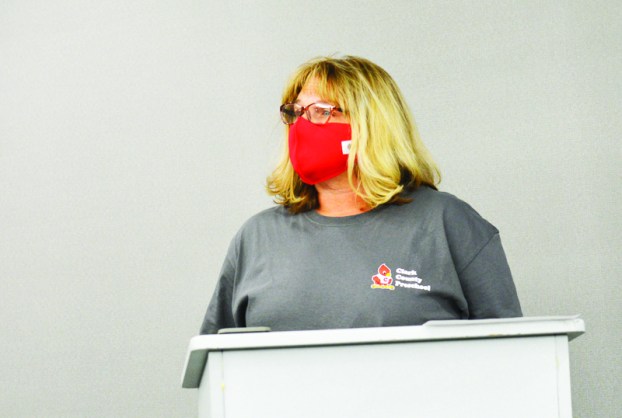 Angie Estes, administrative assistant for the Clark County Preschool, was the only member of the public who gave testimony at the public hearing Oct. 14 on the school facilities plan. (Photo by Randy Patrick)

Stakeholders in the Clark County Public Schools were given an opportunity to be heard one last time before the school district sends its four-year facilities plan off to the Kentucky Department of Education and the state Board of Education for their consideration, but only one woman attended and spoke at the public hearing last Wednesday.

The school board on Monday had approved the Local Planning Committee’s proposal, which included as its first priority for the first biennium the construction of a new Clark County Preschool and its second priority a new Phoenix Academy.

Tim Eaton of the Kentucky School Boards Association, who presided as the hearing officer, said that he had been informed by Donald Stump, the district’s physical plant manager, that no written comments had been submitted.

The only people in attendance in the audience other than a few school district officials and a reporter, was Angie Estes, administrative assistant for the Clark County Preschool, who has worked for the school for 12 years. She made a short but impassioned plea for the preschool as the district’s top priority.

Estes said the only way children can attend the preschool currently is to qualify based on low income or disability.

“My hope is that one day this great program will be open to all Clark County children,” she said. “It breaks my heart that we have children that we have to turn away because they don’t qualify.”

Estes mentioned that at the Oct. 12 school board meeting, it was said that preschool attendance doesn’t need to grow because its demographic was being served.

“I beg to differ,” Estes said. “The fact is that Clark County does have a huge low-income population and at-risk children.”

She said the school qualifies 250 to 300 students each year.

The proposal calls for building a 38,000-square-foot building for 350 students that can expand to include 450.

Estes asked rhetorically, “Why can’t we have a state-of-the-art building that the most vulnerable students can attend and have a sense of belonging and pride in themselves, for a school that will lead to lifelong learners?”

The preschool has been in multiple locations, but is currently in the former Hannah McClure Elementary School near College Park and the Public Library.

That school was built in the 1950s and is inadequate for the students’ needs, Estes said. It has two ramps that are not ADA-approved and are “falling and and separating from the walls,” no central HVAC or fresh air return intakes, not enough restrooms and not enough classroom space. Some of the classes are in mobile units. The cafeteria shares space with the gymnasium, and children have to cross a street and parking lot to get to the playground.

Estes agreed with a statement by Board Member Gordon Parido that the preschool isn’t the building, it’s the people who serve the children and their families. But she suggested that they could better serve them with a better building.

“If we have done this under the circumstances we’re in now, imagine what we could do with an adequate and appropriate facility,” she said.

“My hope is that this board … will continue to keep preschool as our No. 1 priority as recommended unanimously by the district planning committee and build a preschool facility that our community can be proud of. And I would like to thank that committee for the hard work and the dedication they put into developing this plan,” Estes said.  “The preschool has been overlooked for far too long. The time is now.”

Eaton said he would prepare a written report of the public hearing to present to the school board at its Oct. 19 meeting.

“If the board accepts the hearing report, that is the last step in this process,” he said.

It is a process that began in January.

Eaton said he had spoken earlier in the day with someone with KDE in Frankfort, who told him Friday, Oct. 16, was the deadline for submitting the plan to the state, but that the district would be given an extension until Tuesday morning after the board considers it.

The school board meeting Monday happened too late to include coverage in this print edition of The Sun.

“We’re hopeful they will approve the report,” Eaton said of the KDE and state board, which has its next meeting in December. “I think the work has been well done. I don’t think you have anything to worry about.”

At the school board meeting Oct. 12, it was announced that the district’s bonding capacity is currently $15 million, but by next summer, it should be $17 million, mostly because of low interest rates.

Other construction projects not scheduled in the plan include improvements to the Central Office, the Special Education Office, school bus garage and the maintenance-information technology building.

Long-time Winchester Police Chief Billy Claypoole is being remembered as a leader who set high standards for his officers. Those... read more