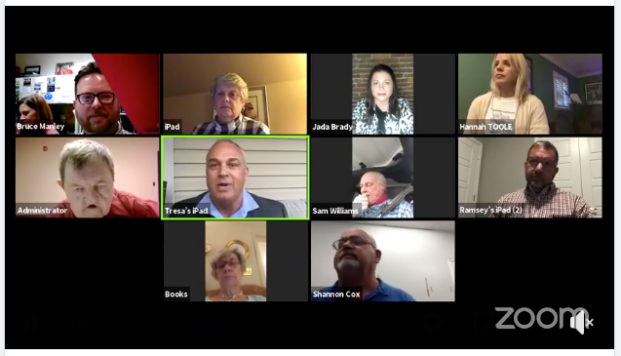 With seven candidates vying for the four seats on the Winchester Board of Commissioners, the field is crowded.

Monday evening, the seven participated in a virtual candidate forum to answer two questions: What strengths and weaknesses they bring to the commission and how they want to spur growth in Winchester, which is projected to be flat by 2040.

“We need to make more affordable housing,” Book said. “The city owns land on Cook Avenue. We need to build on that.”

Williams said the city’s infrastructure needs to be part of the answer, as well as a direction for the city.

“Do we want to be the best retirement community in Kentucky?” he said. “That may be where we need to focus.”

Winchester, he said, is located to attract people from Eastern Kentucky who left for careers and return to Kentucky, but don’t want to go back in the mountains.

Flynn and Strode said they are already seeing some increases, citing new housing developments off Bypass Road and the growth in downtown Winchester.

“I’d say in the next five years, it will start to grow,” Flynn said. “People are coming to Winchester.”

“I feel like we are growing,” Strode said. “We have to market what we have. We’re like a hidden treasure. We have to get out and sell ourselves.”

Toole said she wants Winchester to be a “city of growth” rather than a bedroom community to Lexington.

“I’d like to work toward developing and maintaining our green space,” she said. “I want my family and friends to come here.”

Cox said the city needs to be aggressive toward growth, because businesses and restaurants count on the number of rooftops as a factor in where they locate.

“We need to attract businesses,” he said. “We need places for those people to work and places for them to stay. We have to train our workforce. We’ve got to make sure the jobs are there.”

The candidates were also asked what their personal strengths and weaknesses they bring to the table.

“The strength would be working as a team,” Reed said. “I often went to people’s homes late at night with water issues. We need to be committed. We need to work with each other.”

The commission, though, has not developed the long- and short-range goals she championed two years ago.

“Somehow that process has gotten sidetracked,” she said.

Williams said his training in the military and as a civil engineer instilled an attitude to get things done.

“I’m very familiar with how to maintain, build and repair infrastructure,” he said. “Infrastructure is the backbone of any community.”

Cox said he gets involved in a number of projects in the community, which can take his attention.

“Sometimes I have too many irons in the fire,” he said.

Flynn said he brings a passion for serving the community, fueled by his 20 years with Winchester Fire-EMS.

“I know the city,” he said. “I know the people in the city. I know all the neighborhoods.”

Sometimes the process of government can be too slow, he said.

“My weakness is I get impatient,” he said. “When I want something done for a project, I want to get it done.”

Toole said she’s coming into the race with no experience, but a willingness to listen and learn.

“I’m a fantastic communicator but more so a listener,” she said. “I really want to give it my all.”

Strode said she serves from love of the community.

“I’ve loved this community since I came here,” she said. “It’s so important for me to be transparent. Being with people and listening is a real strength. We’ve not addressed our long-range plan. We are lacking in affordable housing. Government has got to support that.”

Book, who spent 26 years on the commission, said the community’s strengths include its location between major highways, but it needs a grocery store downtown and more development around exit 96 on Interstate 64.

Once again, more than two dozen new cases of COVID-19 have been reported in Clark County over the past week. ... read more