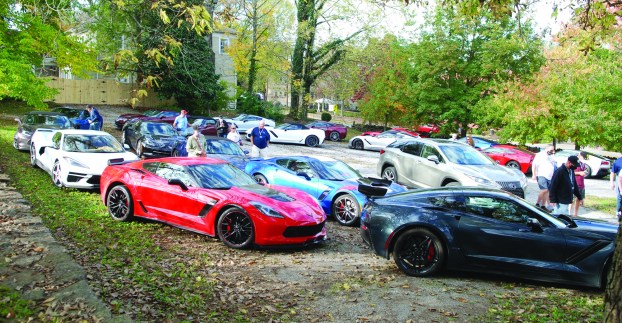 Corvettes and their owners representing 11 different states arrived in Winchester Friday morning for a stop on the Kentucky One Lap, a fundraiser for the Kentucky State Police’s Trooper Island Camp in western Kentucky. The participants toured the museum before returning to the road. (Photo by Fred Petke)

Corvettes make stop in Winchester during One Lap

A group of  Chevrolet Corvettes will garner attention anywhere, especially with one in Kentucky State Police livery among them.

Friday, some of this year’s participants in the Kentucky One Lap arrived at the Bluegrass Heritage Museum for a tour and a rest stop during the day’s festivities.

The event is a fundraiser for Trooper Island, the Kentucky State Police camp in Western Kentucky. Camp Director and Master Trooper Jonathan Biven said the One Lap has occurred for a decade. Corvette enthusiasts will meet in Kentucky for a week worth of driving and exploring the state.

“We pick a spot in Kentucky, stay for five days and branch out,” Biven said.

This year’s event is centered in Paintsville and has ventured out to communities including Lynch, Corbin and Pikeville, he said.

“(Thursday) was a drive through the mountains,” he said.

The trip regularly includes four weeks worth of driving on the same route, with a different group of participants each week, he said. This year, there are five weeks with about 20 cars each week.

Biven said the number of participants dropped this year, thanks to COVID-19, but it still attracts Corvette enthusiasts from the surrounding area.

This week’s group sported license plates from 11 different states, including Tennessee, Florida, Michigan, Indiana, Texas, Verginia, Pennsylvania, Maryland and Illinois. Only one came from Kentucky, aside from Biven.

The One Lap is sponsored by the National Corvette Museum, located in Bowling Green across the road from the plant where Corvettes are built. Biven said the NCM has been a corporate sponsor for the camp for several years, which helped build a new swimming pool and other projects.

The event is open to anyone who owns a Corvette. To register for future events, contact the National Corvette Museum.

After research, discussion and no clear answer on when an accumulated past-due fuel bill started, the Clark County Fiscal Court... read more