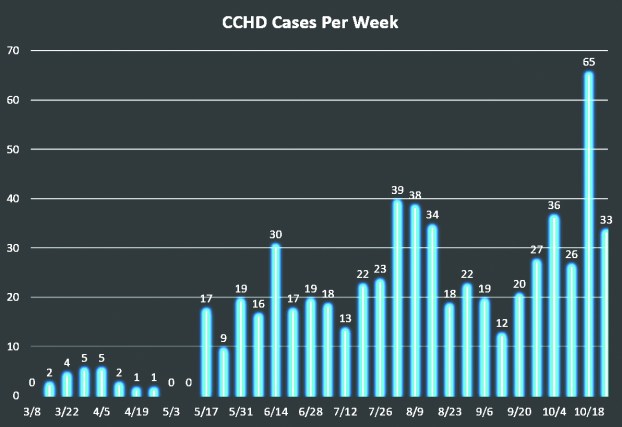 Clark County saw a record-high number of new coronavirus cases in October, according to the latest data from the Clark County Health Department.

In October, there were 164 new positive cases of the virus reported, breaking the previous high for cases in August, when there were 137 new cases reported.

October also saw many more cases than the previous month. There were 91 cases reported locally in September, which is the third highest reporting month for the county.

As of Friday evening, there had been 612 total cases reported in the county, and a dozen deaths attributed to the virus locally.

More than 530 locals have recovered from the virus, and there are at least 67 active cases as of Friday.

During the week ending Nov. 1, there were 33 new cases reported locally.

That’s half as many cases as were reported the previous week, which ended Oct. 18, and saw 65 new cases. That week remains the highest reporting week on record locally by far.

The second highest single-week numbers came in July, when there were 39 cases reported the final week of that month.

The fewest cases have been reported in the 80 and older range, with 44 cases.

With the seven-day rolling average of new cases taken into account, the county is in the orange zone, according to the Kentucky Department of Public Health. The local rate incidence rate was 14.6 as of Friday.

The seven-day incidence rate is calculated by taking the total number of unique cases in each county over the past seven days, divided by seven to get a daily average, divided by the U.S. Census Bureau county population and multiplied by 100,000 to get the incidence per 100,000 people.

At one point last week, the county had an incidence rate of 25.2, which put the county into the red zone and prompted the local schools to delay in-person learning.

While the county has not moved to official in-person learning, some students have been returning to classrooms in small groups to receive specialized instruction, and teachers have been working from school buildings since the start of the school year in September.

According to the state’s K-12 COVID self-reporting database, there have been 74 students and 19 staff from Clark County Public Schools that have required quarantine at some point since the start of the school year. The database indicates there have been seven positive tests among students and two among staff members, but the data does not indicate if exposure occurred in the school setting or elsewhere.

The county was only classified as red for one day, and has since remained in the orange zone.

Red zone counties are asked to take several precautions to help mitigate the spread of the virus.

“It takes an entire community to protect the most vulnerable, to keep our schools open and to keep our economy running,” said Gov. Andy Beshear. “What we need to see is that when a county hits red, everybody comes together in a coordinated effort.”

Those precautions include working from home when possible, government offices operating virtually, reducing in-person shopping, ordering take-out or using drive-throughs at restaurants, prioritizing businesses that follow the mask mandate, canceling public and private events, not hosting gatherings of any size and avoiding non-essential activities outside the home.

As of Monday morning, at least 68 of Kentucky’s 120 counties were categorized in the red zone by the state.

“This is the worst our incidence rate map has ever looked and every indication would suggest that it’s going to get worse before it gets better,” said Dr. Steven Stack, commissioner of the Department for Public Health. “This is a human problem. A global problem. Everyone wants it to be over. But if we get cavalier about it, it’s like being at a casino – the house always wins. The virus is the house. When everyone flaunts the guidelines, they don’t work.”

In Kentucky, more new cases of the virus were added last week than any week before.

There were 11,774 new cases reported last week in the state.

Hospitalizations are also at an all-time high in the state. As of Sunday’s COVID-19 report, there were nearly 1,000 Kentuckians hospitalized with complications from the virus. Of those, 250 required intensive care and 136 of those were on ventilators.

Overall, the state is classified as in the red zone, according to the White House’s Coronavirus Task Force Oct. 25 report, which is the latest available.

The task force lists Clark County in the yellow zone as of the latest report.

Little things matter. A few times a week, Lois Thomas, 86, and another woman visit one of the “blessing boxes”... read more