CONDLEY: After some hiccups with sauce, chicken recipe is a winner

It was Saturday afternoon, and all day I’d been trying to send subliminal messages to Brad that he should take me out for supper, but those messages were not getting through.

At about 2:30 p.m., when I realized I needed to figure out what we were going to have for supper, I sat on the kitchen floor and started looking through recipes I’ve collected over the years.

I was looking for something that would not require a lot of effort and for which I had all of the ingredients.

When I spotted today’s recipe in the stack, I remembered we had a half-eaten bag of pretzels in the pantry and knew this would be on the table that night. 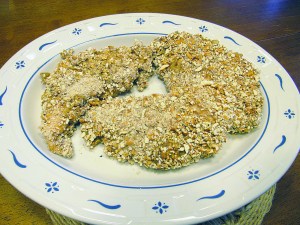 Pound/flatten chicken breasts until about 1/4-inch-thick – and here’s an easy way to pound a chicken breast: put it in a zipper-sealed bag first, then flatten with the mallet or whatever you’re using. It keeps splatters at a minimum. (Flattening the breasts make them even more tender.)

Set half of mixture aside to be used as dipping sauce.

Coat chicken completely in remaining mustard mixture and then dredge in pretzel crumbs.

While I was sitting in the floor sifting through recipes, Brad came into the kitchen and asked what I was doing.

When I told him, he asked if he could go get some kind of meat out of the freezer. Since it was late, I knew chicken would thaw quickly in cool water so I told him he could bring some chicken upstairs.

I placed the frozen chicken in a bowl of cool water, and then started thinking about the rest of our meal. I opted to prepare some green beans that we’d canned from our garden — they should be ready by supper time. We had potatoes that need to be used so I scrubbed a couple of them, too.

When it was time to begin preparing the main part of our meal, the chicken was indeed thawed.

I read the recipe again and started pulling the ingredients together.

I looked in the pantry hoping we had a bottle there, but no such luck. Not sure how to proceed, because I sure wasn’t going to run to the grocery for a bottle of mustard, I turned on the computer and typed in Dijon mustard substitutions.

That search yielded a lot of information: How to make your own and a few substitutes. One substitute was plain old yellow mustard, others included making your own with dry mustard, white wine vinegar, and a couple of other ingredients, and one substitution was honey mustard.

I remembered we had a few little packets of honey mustard sauce from my favorite fast food restaurant, Chick-fil-A, and headed to the refrigerator to search for them. There were three packets, and I hoped that would be enough.

I scraped every drop of honey mustard from those packets and also scraped it off the foil lids of the packets. It was still not quite enough, so I squirted in a little yellow mustard. Next, I put Dijon mustard on our grocery list.

Now I was ready to continue, and added the mayo, honey and minced garlic to the bowl of mustard.

I didn’t have a green onion, and headed back to the computer to see how much purple onion would equal a green onion. I could not find that tidbit of information and opted to use some dried chives (for the green part of the onion) and some dried onion flakes for the white part. I just guessed at how much to use.

I sprinkled in some salt and fresh ground pepper.

The directions said to add cayenne pepper but didn’t mention that in the ingredient list. Since I don’t like spicy food, I just added a small pinch.

I stirred everything together and let it sit hoping the dried chives and onion flakes would add their flavor to the mixture.

While letting the mustard mixture flavors meld, I poured pretzels into a zippered bag and pounded them with a rolling pin until they were crushed.

I wasn’t sure a cup of pretzel crumbs would be enough, but there were plenty of pretzels left if I needed more.

It was time to pound the chicken. I opened the thawed bag of chicken and realized there were only three breasts in the package instead of four. Oh well, that would have to do.

I placed the first breast into the bag and used a flat meat mallet to pound the chicken. The bag method worked great, but if you don’t have a zipper-sealed bag, you can place the chicken between two sheets of plastic wrap and achieve the same outcome, it’s just a little messier.

In no time all of the chicken was flattened.

I preheated the oven and lined a rimmed baking sheet with parchment paper, for less mess when cleaning up.

I’ve mentioned to you before that I don’t like condiments like mustard and mayonnaise, though Brad does; so, if there wasn’t much dipping sauce left that wasn’t going to matter to me.

I placed each piece of chicken on the lined baking pan, and into the oven it went for 30 minutes.

When I peeked into the oven, the chicken coating hadn’t browned much so I let it continue cooking while I set the table and put our potatoes into the microwave.

When I opened the oven to take the chicken out, the mustard smell was very strong and I thought I wasn’t going to like this dish; if it smelled like mustard it would surely taste like mustard, and I don’t like mustard. Even if I didn’t like the chicken, I knew my belly would get full with a baked potato and green beans available and then dessert.

We sat down to eat, Brad prayed over our meal and we each put chicken on our plates. I only put a half piece of chicken on my plate.

Brad was the first to take a bite. He said it tasted pretty good.

I took a bite and was pleasantly surprised that it didn’t taste like it smelled. I didn’t get a huge pretzel flavor either. Brad said the pretzels were subtle.

Regarding the dipping sauce, Brad thought it was OK, but the chicken didn’t need it.

Brad said his first few bites of chicken weren’t as juicy as he had hoped, and I told him that was probably because I let it cook longer than recommended. But as he ate, he said it must have just been those first few bites because the remaining piece of the chicken was tender and not dry.

This recipe, though it didn’t have a title, had been printed from the Internet. The only credit I can give was this statement listed at the bottom of the page “Dawn/NYS posted this recipe to Gail’s Recipe Swap.”

Well I’ll have to say, in spite of the condiments in this recipe, it’s a nailed it in my book. I’ll be adding it to my self- made cookbook with a note to have Dijon mustard on hand.

I was looking through the pantry the other day and found an orange cake mix.  I don’t typically buy cake... read more