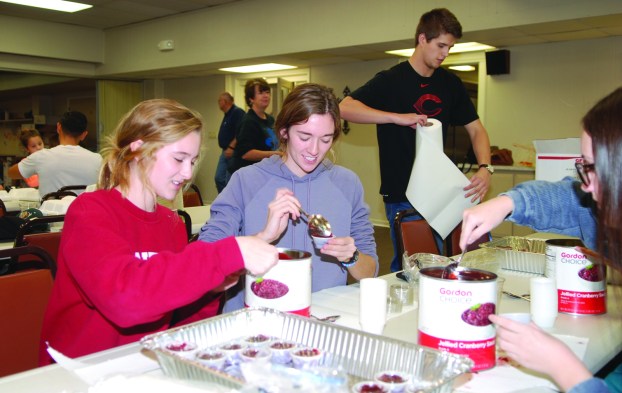 Ellie and Emma Mitmesser spoon cranberry sauce into plastic cups in preparation for the 2019 Thanksgiving meals at First United Methodist Church. This year's meal has been canceled because of coronavirus concerns. (File photo)

Since the 1970s, First United Methodist Church has fed hundreds upon hundreds of people on Thanksgiving day, with most meals delivered by dozens and dozens of volunteers.

This year will be the first time in decades the church hasn’t offered its traditional meal. The logistics were too plentiful to overcome.

“We kicked around so many ideas but the numbers are so huge,” said church member Mike Jackson, who has coordinated the meal in recent years. “There’s no real safe way for our volunteers is what it came down to.”

Annually, about 60 people will bake turkeys in their homes, which were delivered to the church. A group of volunteers would spend Wednesday preparing the meals, with Thursday being the day for delivery and serving some meals in the church.

Typically, the church would prepare 1,300 to 1,400 meals; more than 80 percent of those would be delivered by volunteers throughout Clark County. About 200 volunteers would arrive on Thursday to deliver the meals.

“It’s a lot of moving parts,” He said. “Every step, it’s how do you do it safely? We’ve struggled and couldn’t come up with something we were comfortable with.”

Instead, the church wants to support other food-related programs this year.

“We are going to try and take up some special offerings in the next couple weeks,” he said. “I know we’ll help some other local agencies that focus on feeding.