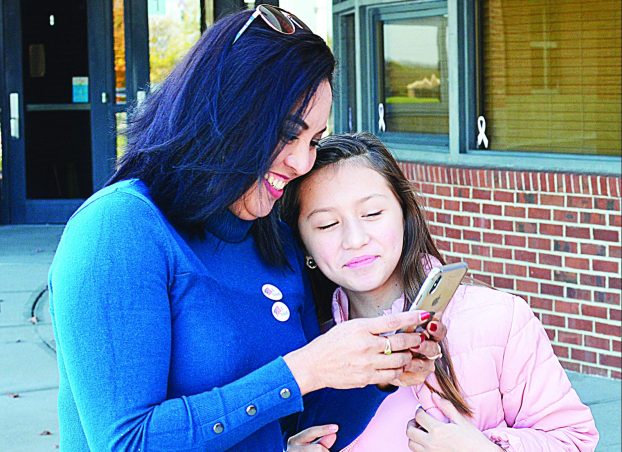 Elena Davis celebrated getting to vote as an American citizen by having her daughter, Mia, take a smartphone photo after she filled out her ballot at Strode Station. (Photo by Randy Patrick)

Voters went to the polls Tuesday to choose city commission, school board and legislative leaders, but it was the contentious presidential race that brought people out in droves.

The election was a referendum on President Donald Trump.

“I voted for Trump,” said Reich, 18. “I like his policies and I certainly disagree with a lot of Joe Biden’s policies … and plans.”

“I think it’s very important that Trump doesn’t get another four years,” said another young voter, Russell Dunder, who walked out of the school behind Reich and Leal. “I don’t know that America can handle another four years.”

At Strode Station, Elena Davis had just voted as a citizen for the second time, and her little girl, Mia, took her picture of her in front of the American flag to celebrate the occasion. They both seemed happy.

She said the biggest issue for her was that she wanted a better life for herself and her family, more security and equality under the laws. She didn’t want to say how she voted.

Marc Kendall, 25, said he hasn’t seen a more divisive election, but it was only his second time.

“Whoever wins president, we all have to get up in the morning and live our regular lives. It’s about being together,” he said.

“I trust God in all of this,” he said. “He’s sovereign, and regardless of how this election turns out, he is going to have his glory.”

Charges for assault with rock sent to grand jury

Assault and burglary charges against a Clark man who allegedly hit a woman in the face with a rock are... read more