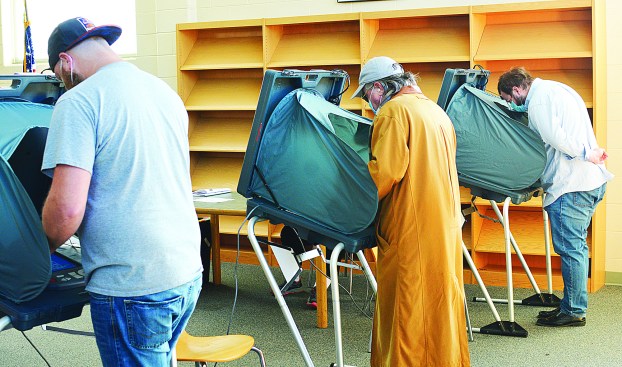 In some parts of the country, election officials were expecting long lines at the polls on Election Day, but in Clark County, turnout was light early in the afternoon.

By late afternoon, though, the numbers had picked up, and by the time the polls closed at 6 p.m., 60 percent of registered voters in the county had cast their ballots. That’s slightly better than in the 2016 general election, when the turnout for the county was 59 percent.

At the Strode Station Elementary School polling place, Shelby Gill said only about 350 people had voted by around 12:30 p.m.

The noon hour is usually one of the busiest times of day because workers vote on their lunch breaks.

“It’s been very slow. I was expecting a lot more than this,” Gill said.

“This morning, we were rolling,” Doris Kennedy, another worker at the same location, said. There had been about seven voters lined up outside the schoolhouse doors at 6 a.m. when the polls opened, but it had slowed down by midday.

“It’s been a little less than we expected,” Sharon Williams, a poll worker at Campbell Junior High School, said a short time later.

But she said she thinks that was because so many had voted early, either on the machines at the Clark County Clerk’s Office or by mail-in ballot, something the secretary of state and governor agreed to allow all voters to do this year because of the novel coronavirus.

Early voting, before Election Day, was heavy in Clark County. A week before the election, 5,670 people had voted absentee at the courthouse, and the county clerk had gotten back 4,515 mail-in absentees of the 5,878 mailed out.

By Election Day, there had been at least 5,643 absentee ballots returned.

County Clerk Michelle Turner said that for mail-in ballots to be counted, they must have been postmarked by Nov. 3 and received by Friday, Nov. 6.

The cutoff for bringing mail-in ballots to the box at the courthouse, however, was Election Day. One voter was seen bringing his in a few minutes before the polls closed.

The race most voters seemed most interested in was the presidential contest between Republican President Donald Trump and Democratic former Vice President Joe Biden.

However, also on the ballot were races for the U.S. House and Senate, state House, city commission and school board, as well as two constitutional amendment questions.

As of Thursday, Clark County remains in the state’s orange zone for its coronavirus incidence rate. There have been at... read more