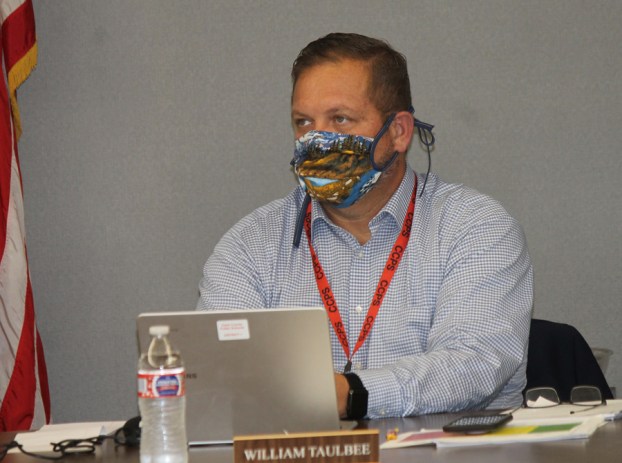 Clark County Board of Education Member Bill Taulbee during another meeting earlier this year.

Board refuses to keep schools virtual until after Christmas

During a week when coronavirus infections reached their highest level ever in Kentucky and hundreds of children in the state tested positive for the disease, the Clark County Board of Education voted 3-2 against keeping students out of classrooms until after the first of the year.

It did so despite the recommendation of Superintendent Paul Christy and against the pleas of several teachers who told the board most of their colleagues don’t feel comfortable being in the classroom with students when the county is “in the red.”

However, a decision two days later by the governor supersedes the school board’s decision.

Gov. Andy Beshear announced Wednesday new restrictions to slow the rampant spread of COVID-19 in the state. They included an order that middle and high schools must remain online or virtual until at least Jan. 4. Elementary schools may return to in-person classes Dec. 7 as long as their county is not in the “red zone” (25 cases or more per 100,000 population) and they adhere to all the Healthy at School guidelines on the state Cabinet for Health and Family Services’ website, https://govstatus.egov.com/ky-healthy-at-school.

Last week, Christy decided to return to online learning for Nov. 12 and 13 because of the rise in the rate of COVID-19 infections. Then on Sunday, he extended the directive to keep students at home until Nov. 30, when they would return from Thanksgiving break.

But during the board meeting Monday night, which was online rather than in person to avoid the risk of contracting the virus, one of the members, William Taulbee, suggested that the students remain online through the end of the year.

He made that motion because he thought that “going back and forth” between hybrid and all-online learning was frustrating and that it resulted in too many children being “left behind.”

“Going back for a short time between the Thanksgiving and Christmas breaks just puts everyone kind of on edge and doesn’t give parents or teachers enough time to plan,” he said.

Member Scott Hisle said he thought it was looking too far into the future to try to determine what the situation with COVID might be like in early December.

“It could be that things have turned around and our numbers have gone back to yellow or green, and if we’re in that situation, I would hate to have us preventing the ability to go back in person,” Hisle said.

He said that “despite the heroic efforts” of those teaching online, he believes in-person learning is “the best option.”

Taulbee said he agreed that in-person is best, but under the circumstances, in-person learning isn’t going to be consistent, and it would be better to concentrate on one way for the short term.

“I don’t see this going away between now and the first of the year,” he said of the virus.

Member Sherry Richardson had earlier in the meeting suggested the school district’s hybrid model of giving students three days each week of distance learning and two days of in-classroom instruction was hard for the teachers, students and parents, and compared it unfavorably to Fayette County’s model of all-virtual instruction. But she was conflicted when it came time to vote on Taulbee’s motion.

“If we just had a different method. If our teachers could have the time with the students, I wouldn’t mind it so much,” she said. “And I do know it’s probably hard going back and forth.”

“I don’t know,” she said after a long pause.

“I don’t either,” Board Chair Ashley Ritchie said, although she had seconded Taulbee’s motion.

“Mr. Christy has the right to override this,” Ritchie said, and she asked why the board needed to vote on it if the superintendent has the authority under the board’s rules to close school anytime he thinks the children are at risk.

Christy answered that he wanted to work with the board and get its members’ input. He said

that his “direction from day one from this board has been to get us back in school, in person, as soon as possible, and that’s what I’ve been working toward.”

That’s why in-person instruction has been on again, off again, but since students have returned to classrooms, more of them have tested positive and more employees have been under quarantine and unable to work in the schools.

“My recommendation right now would be to stay out and do all virtual until after we return from Christmas break at the first of the year. And in the meantime, we look at what’s going to happen after that,” he said.

Christy said that while he was attending the meeting, he had texted all nine of the district’s school principals and had heard back from seven of them, and they all agreed with going in that direction.

But Hisle suggested that if the board voted to go all virtual and the situation did improve, Christy’s hands would be tied and he couldn’t make the decision to bring the students back, because even though he has the authority to keep students out against the board’s wishes, he can’t do the opposite.

That being the case, Taulbee said, he would be willing to withdraw his motion if that’s what Christy wanted.

“I trust your judgement,” Taulbee said.

But Christy said he would welcome the board’s support of his position, and if circumstances improved, he would be back before the board to suggest having the students return to hybrid instruction.

When the proposal came to a vote, though, Taulbee and Ritchie voted to continue virtual learning until after the first of the year. Richardson, Hisle and Gordon Parido voted against it, and the motion failed.