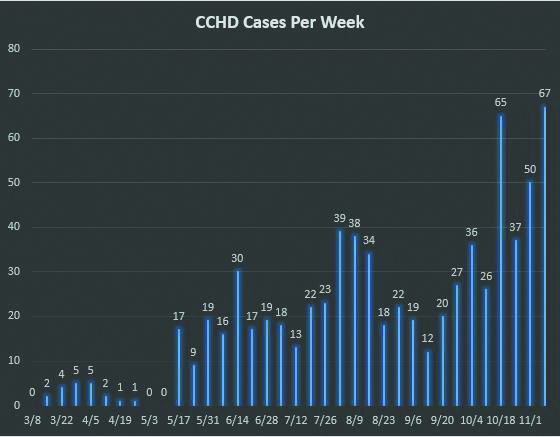 After two record-breaking weeks for new COVID cases in Clark County, the county is in the state Department for Public Health’s red zone.

During the week of Monday, Nov. 9, to Sunday, Nov. 15, there were 71 new cases of the virus, which topped the previous record high of weekly cases, which was 67 the week prior.

As of The Sun’s Monday afternoon press deadline, there had been 748 cases of the virus in the community. That number does not include new cases reported Monday.

As of Friday, the county’s incidence rate, which is a calculated by finding the average number of cases over a rolling seven-day period and dividing by the population to get a rate of cases per 100,000 people, was 29.15.

Counties with a rate of 25 or higher are considered to have critical spread of the virus.

All counties surrounding Clark are also considered red, according to the state’s incidence rating map.

Counties in the red zone are asked to apply a number of mitigation efforts, including things like letting employees work from home when possible, returning to virtual instruction for students, reducing in-person shopping and dining, canceling public and private events, avoiding gatherings of any size and reducing all non-essential activities.

Kentucky also saw record-breaking numbers of new cases last week and has been classified as in the White House Coronavirus Task Force’s red zone. Kentucky ranked 21st in the nation for the number of new COVID cases according to the most recent report, which was released Nov. 8.

There were an average of 2,406 new cases reported each day during the last seven days.

There were also record-high numbers of COVID patients hospitalized Sunday, with 1,383 requiring hospitalization and 330 needing intensive care. There were 156 requiring ventilators.

Last week, the state’s incidence rate, which is the percent of people who tested positive out of the total number of people tested, reached 8.88 percent.

As of Monday afternoon, there had been 137,586 cases of the virus reported in Kentucky and 1,661 deaths.