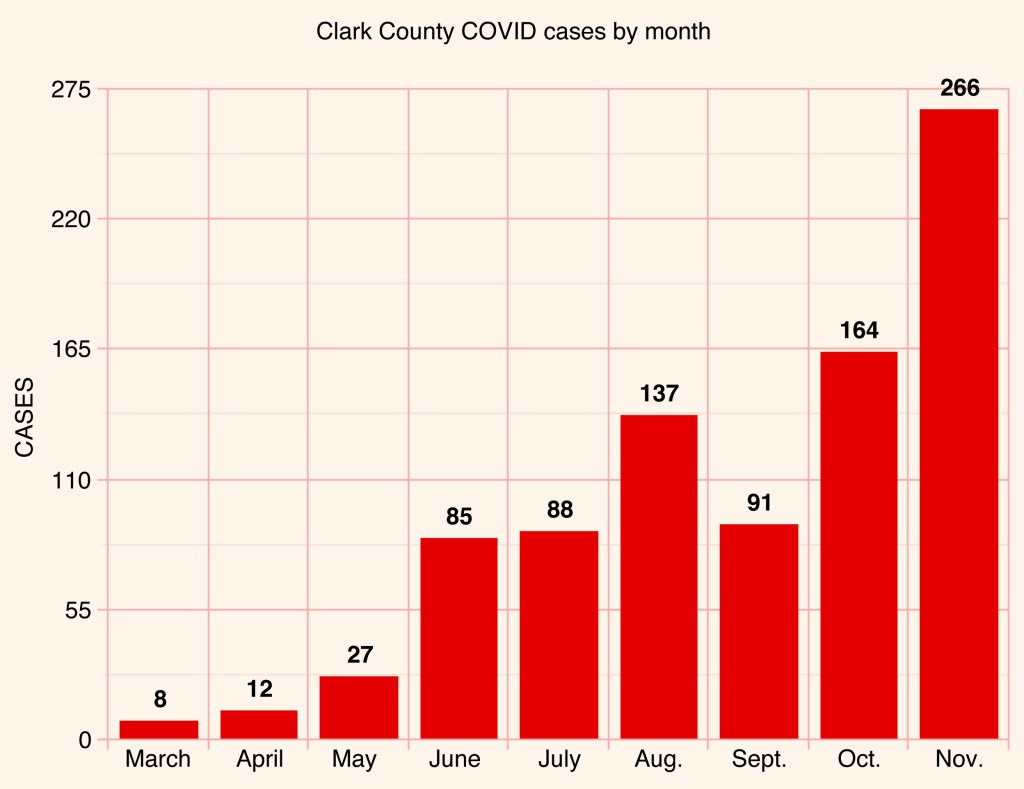 Clark County continues to see a rapid increase in cases of the coronavirus, with November already seeing more than 100 more cases that the previous record-high month.

Since Monday, there have been 43 new cases of the potentially deadly respiratory virus reported in the community.

On Tuesday, the Clark County Health Department reported 28 new cases, which is the most reported in a single day since the pandemic hit Clark County in March.

As of Tuesday’s report from the Health Department, which was the latest available as of The Sun’s press deadline, there had been 881 cases reported locally since March.

There have been 13 deaths related to the virus locally.

As of Oct. 30, 40 people had required hospitalization from complications of the virus, but those numbers are only updated monthly. New data, which will reflect the number of people hospitalized in November, should be available Dec. 1.

With the rise in cases, Clark County remains in the state Department of Public Health’s COVID red zone, which is for communities with an incidence rate of 25 or more. The local incidence rate was 44.95 Tuesday.

The seven-day incidence is calculated by taking the total number of unique cases in each county over the past seven days, divided by seven to get a daily average, divided by the U.S. Census Bureau county population, and multiplied by 100,000 to get the incidence per 100,000 people.

According to the White House Coronavirus Task Force’s Nov. 22 report, Kentucky is in the red zone for cases. The Task Force’s red zone is for state’s with 101 or more new cases per 100,000 population.

More than 2.6 million tests have been administered with an 8.92 percent positivity rate.

Kentucky is 24th in the nation for rate of new cases.

Between Nov. 14-20, an average of 362 patients with confirmed COVID and 132 patients with suspected COVID were reported as newly admitted each day to hospitals in Kentucky, which is an increase of 15 percent in total hospital admissions.

Nationwide, there have been at least 12.7 million cases of the virus reported, leading to more than 260,000 deaths.

Worldwide, 59.8 million cases have been reported, leading to 1.41 million deaths. At least 38.3 million people have recovered.