I hope all you had a happy, safe and COVID-free Thanksgiving.

Ah yes, the time for Black Friday and Cyber Monday have come and gone.

This time of year has been adopted as the official kickoff to the Christmas season in the past 50 years per the advertising giants and marketing gurus of retail.

Black Friday is always promised to be the perfect solution to all our problems by incurring debt with the haphazard purchasing of stuff we don’t need.

Mass consumerism is always the prescribed medicine to swallow by our doctors of retail to fix the ills of our economy, which will heal all other ailments of our sickness within society.

Pandemics, social injustice, high unemployment and even terrorism can not be fixed by buying a large screen TV on “sale.”

This ploy of misdirection with shiny “stuff” works on most of our population as they fall prey to the quick-fix scheme of consumerism that temporarily gratifies the buyer as it continues to control and divide the masses.

The analysis on the division of country, man and self are not examined better than in today’s title of discussion, the classic, award winning “Casablanca” (1942). 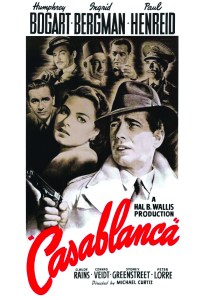 Rick is a troubled man who has fallen far from his once honorable patriotic pedestal of ideals based on integrity and serving the good of others over self.

Rick is now unadmirable and half the man he used to be but is well known and popular amongst the upper-class foreign expats and refugees who now call Casablanca home.

Rick’s club is somewhat a hub of international relations during World War II, with the tensions of war and Rick’s inner turmoil increasing when his old lover Ilsa, portrayed by Ingrid “Notorious” Bergman, travels to Casablanca on the run from the Germans with her famed husband and resistance rebel, Laszlo, played by Paul “Deception” Henreid.

“Casablanca” was directed by filmmaker Michael “White Christmas” Curtiz with a screenplay by brothers Julius and Philip “Arsenic and Old Lace” Epstein and Harold “Mission to Mars” Koch adapted from the unproduced play, “Everybody Comes to Rick’s.”

Curtiz and the Epstein brothers would continue to have a successful career in the industry, but Koch would be brought under investigation by the House Un-American Activities Committee (HUAC) for his outspoken political views resulting in him being blacklisted from work by Hollywood in 1951 as a communist.

“Casablanca” is cited year after year as one of if not the greatest American film ever to be made and is always in stiff competition with rivals, “Citizen Kane” (1941) and “Vertigo” (1958). “Casablanca” is more than just a romance flick with an exotic backdrop during WWII before the U.S. was attacked in Pearl Harbor.

Rick is the embodiment of the U.S. and its once favored position of isolationism before its involvement of WWII.

Rick’s character is torn, once an idealist now a cynic by the time the viewer joins him for a drink at the bar.

Rick’s moral dilemma is that of the U.S. watching the atrocities of war and being conflicted by playing it safe by being neutral on the sidelines. Japan ultimately made that decision for us.

With the world falling apart, Rick’s perception that his life is already over, he emerges to show us that we must pick ourselves up to save our society as it is our collective responsibility. Doing the right thing is never easy, but it is always right.

Sacrifice, integrity and caring for your neighbor will make this world a better place; not a Black Friday sale on a TV.

Real value is born out of what you can give, not what you receive.

Here’s looking at you kid. Have a film-tastic day!

Maurice Manning a finalist for the Pulitzer Prize, and recipient of the Yale Prize for Younger Poets teaches at Transylvania.... read more