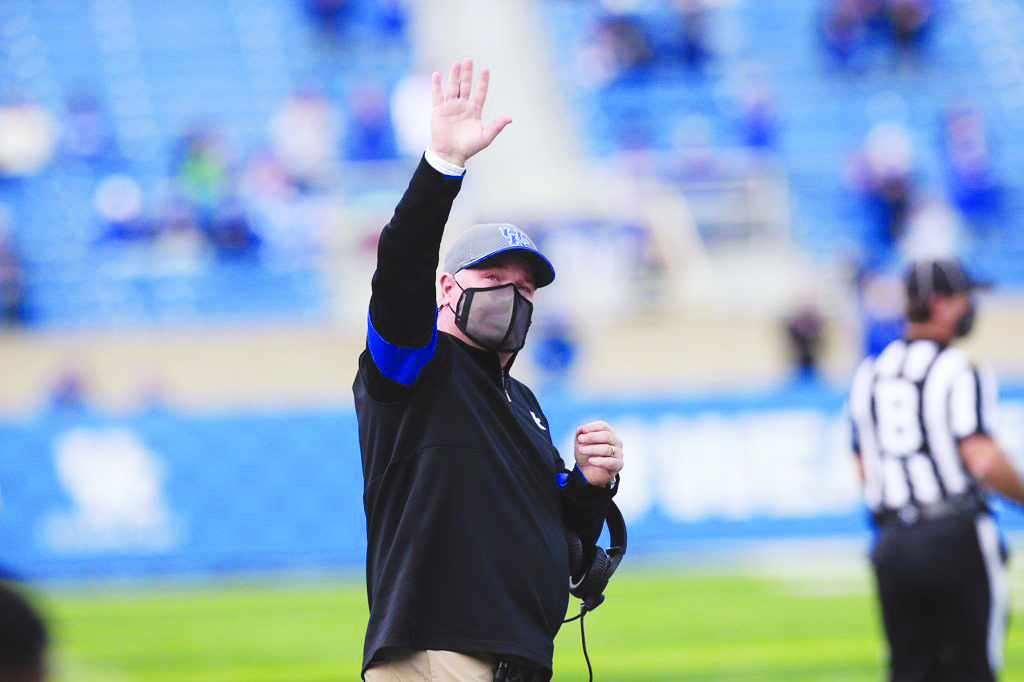 Mark Stoops is hopeful Kentucky can finish the season on a high note when the Wildcats play host to South Carolina Saturday night.

In a year marred by the ongoing pandemic, back-to-back losses to top-ranked Alabama and No. 6 Florida haven’t helped matters either. In the two blowout losses, the Wildcats (3-6) were outscored 110-13 leaving them battered and bruised going into the home finale against the Gamecocks.

“Obviously, this year has been very frustrating and has not gone the way we’ve wanted it to,” Stoops said. “It’s been very well documented how it’s been very different and how unsettling it is and disappointing so, hopefully, we can finish up the right way.”

The Wildcats escaped any exposure to COVID-19 up until the past two weeks when several players and staff members were forced to sit out because of either contracting the virus or contact tracing.

The timing couldn’t have been worse for Wildcats.

“We were really, really good for a long, long time and then it hit us,” Stoops said. “It hit us at a very bad time. When you’re already pretty thin and beat up at the end and you’re playing two of the top five or six ranked teams in the country, that’s not when you want to be thin. It’s just circumstance. It’s just what it is. It’s strange and I know we worked extremely hard to keep our players safe and worked to adhere to the protocols that were in place. It’s hitting us.”

The balancing act of protecting his players and staff, combined with playing back-to-back contests against arguably the top two teams in the league, has taken a toll on Stoops and his staff, especially during the past couple of weeks.

“(It has been) one of the most trying coaching experiences of my life and I’ve been through some tough ones,” he said. “I don’t really want that to be the headline because it’s about the players. I am paid to do this job, I can accept it, I can shoulder it, I’ll be fine. I do care about our players and I do care about their mental and physical well-being. It’s been very trying on them.”

Much like the Wildcats, South Carolina (2-7) has endured the same scenario with the exception of a coaching change late in the season. Will Muschamp was fired seven games into the season and Mike Bobo, former coach at Colorado State, is serving as interim coach while the administration searches for a new football leader.

“It’s different getting ready for South Carolina not having Will on the opposing sideline,” Stoops said. “I really have a lot of respect for Will and the work he’s done and just the competitor that he is. It won’t be the same competing without him being over there as well.”