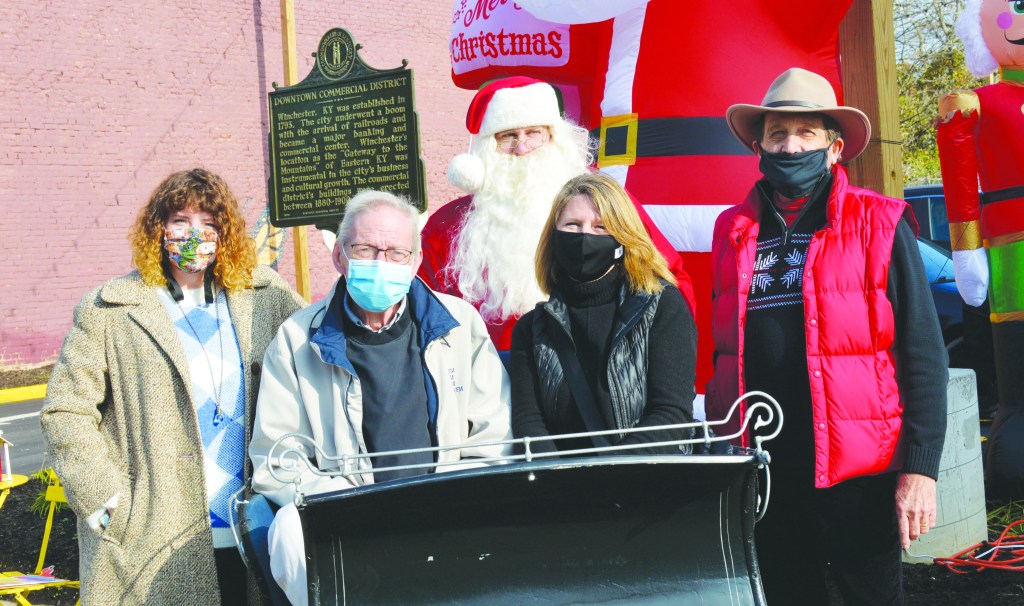 County Magistrate Robert Blanton read a statement about the history of downtown before removing the covering for state Historical Marker No. 2621.

According to the wording, Winchester was established in 1793 and it underwent a boom with the arrival of the railroads, and most of the commercial district’s more than 100 buildings, which are mostly intact, were erected in the 19th century.

The district extends from Washington Street to Ogden Court and includes such landmarks as the old Leeds Theater, Winchester City Hall and the Clark County Courthouse. It was listed on the National Register of Historic Places in 1982.

Forty years have passed since Winchester participated in the first Kentucky Main Street initiative, and in the early days, what is now Main Street Winchester was a model program. It is again seeing a resurgence, Blanton said.

“Right now, I think we’re in the middle of a renaissance again,” Blanton told those gathered for the occasion. Last year, before the coronavirus pandemic, more than $10 million was spent in downtown Winchester, he said. “That says a lot about where people think downtown Winchester is going” to invest that kind of money, he said, and the plaque is a representation of where downtown has come from and where it’s going.

Among the recent developments are the development of the North Main Arts District (NOMAD), renovation of several buildings, establishment of new restaurants and retail businesses and the refurbishing of the old theater as the Leeds Center for the Arts, the launching of Build a Better Block and the Downtown Development Investment Fund, and the creation of the Beer Cheese Festival, to name a few improvements.

The plaque reveal was scheduled to occur on Dec. 5, the day of what would have been the Christmas Parade, Main Street Executive Director Rachael Boyd said. The parade and the big Christmas tree lighting event at the courthouse were both canceled because of the risk of the virus, but local business owners, led by Sherry Richardson, had an open house, and Santa Claus greeted kids at the parklet and let them sit in his sleigh and his old red hot rod, and listened to their wishes.

Later that evening, a few people gathered downtown to watch the tree lighting, after which Santa toured the city and county on a fire truck and a festival of lights guided driving tour of homes decorated for the holidays began.