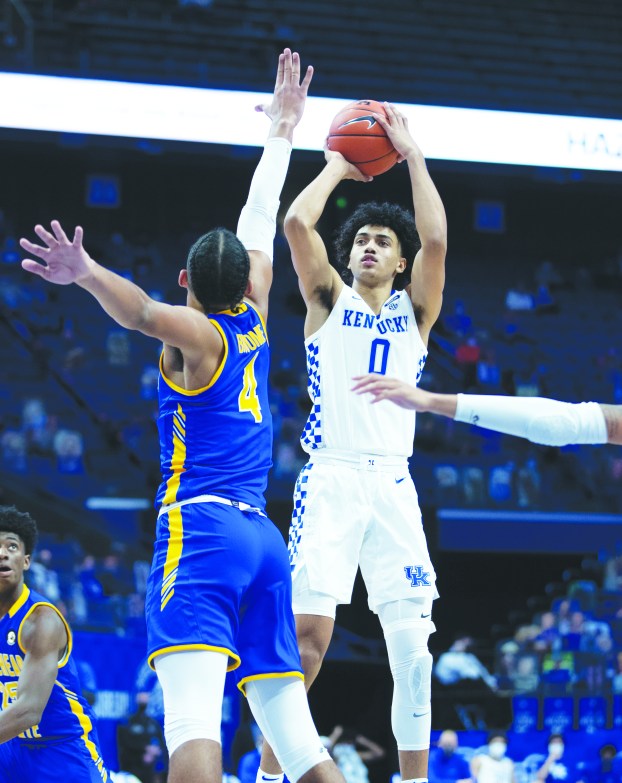 Sophomore Jacob Toppin would like to think one day he could play in the NBA with his brother, Obi. (Vicky Graff Photo)

Kentucky sophomore Jacob Toppin gave the nation a look at what he could do for UK this year when he got six second-half points in the loss to Kansas.

Maybe his brother, Obi Toppin — the best player in college basketball last season and the recent No. 8 pick in the NBA draft by the New York Knicks — was right about his younger brother’s potential when he said he felt he could one day join him in the NBA.

“It means a lot because that’s my brother and I look up to him. I’m just trying to work every day, getting better in the gym and hopefully one day that dream can come true,” said Toppin, a transfer from Rhode Island.

“I’m from New York so I was always really a New York Knicks fan. And that’s big for my brother because he was a Knicks fan too, so to be able to play for the Knicks, that’s big time,” Jacob Toppin said.

“I’m going to try to watch all the games because I want to see my brother play. I want to see his development and how he does. I’m definitely looking forward to that. I’m just going to keep working every day and hopefully I can get to that point.”

The Toppin brothers got their athleticism from their father.

“I used to watch him play all the time when I was younger whether it was in street ball games or whether it was in the city playing at parks,” Jacob Toppin said. “He is –- he was –- a great player. He was very energetic like me and my brother and he was very athletic.”

Mark Stoops is hopeful Kentucky can finish the season on a high note when the Wildcats play host to South... read more