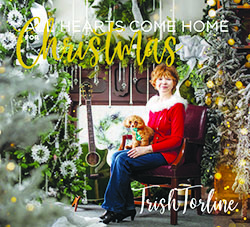 Trish Torline, a singer-songwriter from Winchester, has released a new holiday CD of all-original material.

“All Hearts Come Home for Christmas” is an EP (extended play) disc with an eclectic mix of styles, ranging from rock and pop to country. Some will make listeners chuckle, and others will tug at heartstrings.

“I didn’t want all the songs to be exactly the same thing, so I took a fresh look at Christmas,” the independent artist, church worship team member and former middle school band director, said. “There’s something on there that will appeal to everybody.”

Torline sings and plays guitar and keyboards on the recording, which also features other local musicians.

The release, which is available on a variety of digital formats as well as a compact disc, was recorded at The Sneak Attack Recording Co. studio in Lexington and released on Torline’s own Storyteller Records label Dec. 4.

The tracks include “Don’t Get Your Tinsel in a Tangle,” “I Wish Tonight,” “Lights That Shine at Christmas Time,” “Dear Santa, I Can’t Explain,” “Come Let Us Adore Him,” and the title track, “All Hearts Come Home for Christmas.”

Those who are curious can listen to the new songs on her website at trishtorline.com.

Torline was expected to be on Tim Smith’s 7 a.m. morning show on WWKY Tuesday (today) and had scheduled programs on stations in Cynthiana, Berea and Stanton.

On a day when the Clark County Health Department reported the most ever single-day cases of COVID in the community,... read more