Winchester must remember past for successful future

Winchester was established in 1793.

The Winchester Downtown Commercial District was listed on the National Register of Historic Places in 1982.

On Saturday, at the parklet on North Main Street, a Kentucky Historical Society marker was officially dedicated capturing that development of downtown and recognizing the area for its importance. 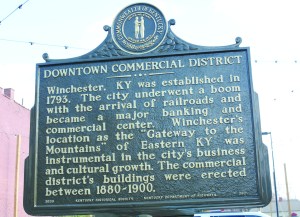 Historical Marker No. 2621, unveiled Saturday, tells the story of Winchester’s downtown commercial district, which remains largely intact since 1900, and which has undergone a renaissance in recent years, according to Magistrate Robert Blanton. (Photo by Randy Patrick)

Few realize that the Winchester Downtown Commercial District contains one of the more remarkable collections of late 19th century commercial architecture in existence in Kentucky.

The district contains an almost continuous band of Victorian-era commercial architecture broken only by the Clark County Courthouse.

Contained within the district is a high concentration of distinctive landmark buildings, which are notable for their local adherence to high architectural styles and use of materials and surface textures.

Downtown architecture is an accurate reflection of the community’s changing sense of aesthetic. Buildings such as the Brown-Proctor Hotel, the Elks Building, the Clark County National Bank, the Citizens National Bank, the Clark County Courthouse, the Odd Fellows Building, Leeds Theater and others are elegant expressions of local as well as national architectural design during period of economic growth. In addition, the terraced “high side” of Main Street is an unusual response to the demands of commercial block development and the natural environment.

The district is important in that so few changes have occurred to obliterate the early development.

The Winchester Downtown Commercial District is one of the more significant commercial cores of the late 19th century extant in Kentucky. The architectural stock presents an accurate portrayal of the change aesthetics which governed commercial construction in the small cities in the upland south.

The history of the community and the region can be traced from building to building, from South Main Street on northward in a linear progression to Washington Street. The history of commerce in the Bluegrass and upland south is written, in part, in the buildings designed and constructed in the Winchester Downtown Commercial District.

Except for storefront facade alterations and the destruction of a few minor commercial buildings/ the streetscape of the Winchester commercial district looks remarkably similar to the downtown of the early 1900s.

Four decades have passed since Winchester began participating in the very first Kentucky Main Street initiative. The nationwide program and Winchester both have since established a track record of success.

In the early years, Winchester was a model program and has again excelled in achieving goals and exceeding expectations.

The most recent is the resurgence of the North Main Street area. Now becoming known as the North Main Arts District (NOMAD) the parklet, the renovation of buildings, the startup of new restaurants and businesses and artists now anchor the longtime Leeds Theater. This renaissance is a culmination of accomplishments like Build a Better Block, the Beer Cheese Festival and the Downtown Development Investment Fund, just to name a few.

I believe that we must embrace our past and our history to reach our potential and our goals. This new historical marker is that remembrance and reminds us we have a distinctive downtown.

Now let us come together as we aspire to become a better community, a destination that attracts new investments, new residents, new businesses and a place that everyone is proud of.

Robert Blanton is a magistrate on the Clark County Fiscal Court and former city manager for Winchester. Portions of this column were taken from the national register nomination, 1982.