Downtown restaurant to feed 400 for Christmas 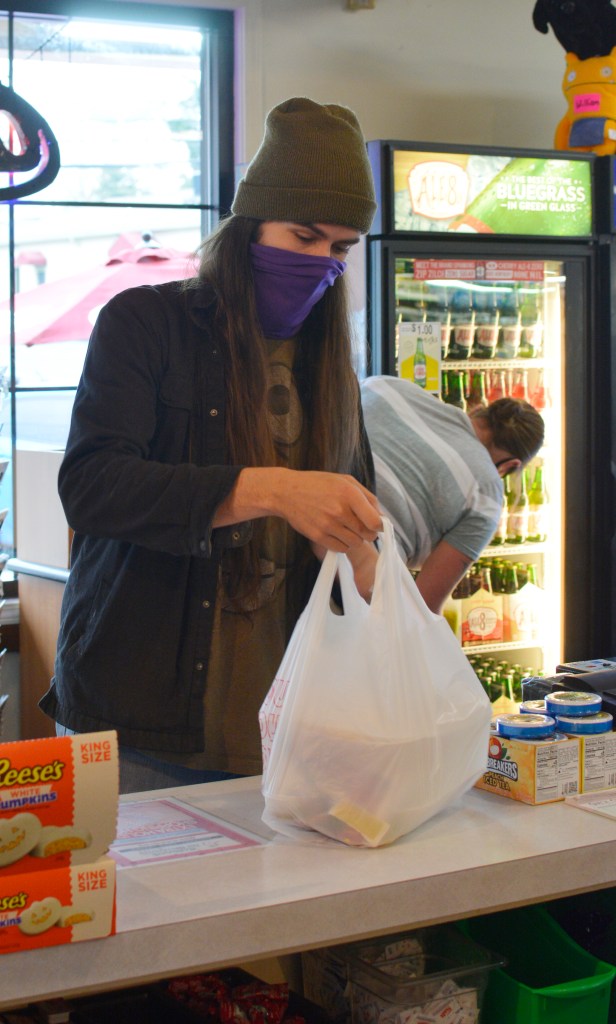 Joey Harper picks up an order to go at Bargains on Broadway. On Christmas Day, the restaurant will be serving a free dinner to go. (Photo by Randy Patrick)

Robert Pritchett and his family are inviting many friends and strangers for a big Christmas Day dinner.

It’s been a tough year for the owners of Bargains on Broadway and Cafe, but it’s been tough for many people, and they thought it would be only right to show their appreciation and spread a little comfort and joy during a winter when those have been in short supply.

“Everybody has suffered in one way or another, from unemployment to just trying to survive,” Pritchett said. “I just think this is the time to try to help out.”

With help from several sponsors, the family business at 26 E. Broadway will open its doors from 11 a.m. to 1 p.m. on Dec. 25 for people to get free dinners with a limit of three per person for their families or friends.

“It’s a basic Christmas dinner with a Little Debbie cake and a bottle of Ale-8,” the owner said.

The menu will include ham, turkey, dressing and gravy, green beans and baked apples.

“They’ll be large portions where there will be plenty of food to eat,” he said.

But the guests can’t eat it there because of COVID-19 restrictions. They’ve got to get it to go.

There will be two lines, for entering and exiting.

“Hopefully, we can do it quickly,” Pritchett said. “We’ll be making the to-go boxes as we send them out,” and there will be a steam table to keep the food warm.

Pritchett said the business will probably be closed for four days around Christmas, but the employees will be volunteering their time on Christmas Day to provide the free dinner.

He said many of his friends have volunteered to help, but because of health concerns, it’s better that they just have a few extra hands. It will be mostly family, he said.

But other businesses, couples and individuals are helping Bargains with the costs. They include Bobby Wolfe, the Little Debbie distributor, who came up with the name, Giving Back to Winchester; David and Pat Perdue of Perdue Law Offices; Chris and Bobbie Jo Goodwin of 21 on Broadway; Ryan Dotson, state representative-elect for the 73rd House District; Marvin and Shari Powell; and Don and Mary Williamson.

“It’s amazing how many people want to be involved,” Pritchett said.

He had at first intended to do 300 free meals, but so many people supported it that they decided to go 100 more.

Bargains on Broadway is an auction and retail store as well as a cafe, but for the second time this year, the cafe’s dining room is closed because of the governor’s restrictions on businesses to slow the spread of the coronavirus, which the state says is working. In recent days, the numbers of new infections have been falling. But there has been an economic price as businesses have had to slow down at a time when they would be ramping up for the holidays.