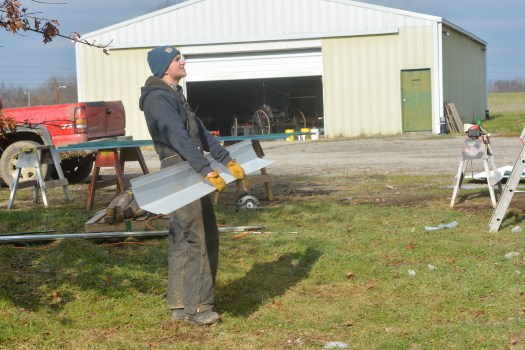 Tate Richardson holds a piece of vinyl roofing material while watching and waiting on other FFA members working on the roof of a new building. (Photo by Randy Patrick) 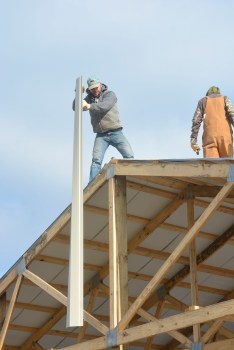 Marcus Wiseman, an FFA member and GRC grad, lifts a piece of vinyl onto the roof of the new FFA and 4-H building at the Clark County Fairgrounds Tuesday. Beside him with his back turned is another FFA member, GRC student Allen Powe. (Photo by Randy Patrick)

The Clark County Fairgrounds will soon have a new building for FFA and 4-H exhibits, and FFA members are providing the brains and brawn to build it.

For most of the day Tuesday, four George Rogers Clark High School students and two graduates, all of them members of Clark County FFA, worked in the cold under the guidance of Frank Hicks, a former teacher and county extension agent, and agriculture teacher Shane Wiseman to put a roof on.

The 40-by-56-foot pole building, which has been under construction for about a month, may be completed by next week except for the electrical work, which will be done by a contractor.

“We’ll pretty much finish the construction this week with some of these same kids and maybe some others besides,” Hicks said.

It will be ready for next summer’s county fair if there is one (this year there wasn’t because of the coronavirus) and could be used before then for livestock judging and other purposes.

“We’ll make use of it other than just the week of the fair,” Wiseman said.

Wiseman said the students doing the work are all members of his Agricultural Construction Skills shop class, but are also all FFA students, since the building is for the student ag club.

They got a matching grant from the Kentucky Department of Agriculture’s Division of Shows and Fairs to cover half the estimated $42,000 cost.

The students doing the roofing Tuesday were Keaton White, Tyler McCord, Tate Richardson and Allen Powe, and the graduates were Marcus Wiseman and Logan Lawson.