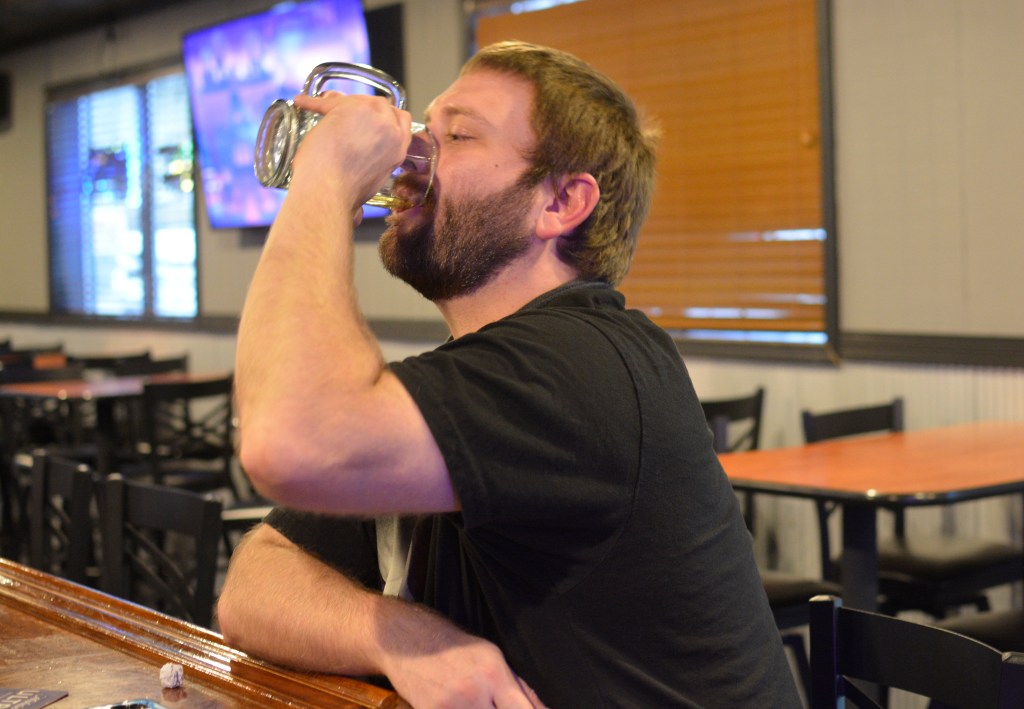 Glenn Stanfield finishes his beer just before 5 p.m. on Nov. 20, when a ban on indoor drinking and dining went into effect. The ban was to be lifted at 12 a.m. Monday.

Some local bar and restaurant owners are asking the City of Winchester to follow the state’s lead in waiving alcoholic beverage license fees for one year to help small businesses get through the economic crisis caused by the virus.

On Dec. 7, Chad Walker, co-owner of The Engine House on Lexington Avenue, led a group of bar owners to City Hall to petition the alcoholic beverage licensing board to forgive the fees for a year. He was joined by Chris Goodwin of Bar 21 on Broadway and Tyler Montgomery of Abettor Brewery on Lexington Avenue. Walker said he also had the verbal support of others who didn’t attend, including the owners or managers of Wildcat Willy’s, La Trattoria, Woody’s and DJ’s.

“At the licensing board meeting, there was a question about how that would impact the City of Winchester,” Walker said. “My retort to that was that having a lot of bars and restaurants go out of business will be a lot worse impact than these little licensing fees.”

Tammy Butler, a license clerk for the city, said the treasurer hasn’t determined yet what financial impact waiving the fees would have on the city budget, but a preliminary estimate is about $23,000.

The positive impact on the businesses would be significant, however, the owners said.

“Ours is a little over a grand,” Walker said, and the state fees that will be waived for The Engine House for 2021 would be about the same amount. That would help pay the utilities for the pub and pizza parlor for a few months, he said.

Walker said he and his wife bought the historic restaurant in January and were prepared to open in March when the coronavirus pandemic reached the U.S. and the governor closed nonessential businesses and prohibited indoor dining in restaurants. Dining rooms reopened in May at limited capacity, but then were shut down again last month. The restrictions have hurt businesses, though officials believe they may have been effective in limiting the spread of the contagion.

Walker said all he and his wife are doing at this time is working to keep the restaurant in business and their workers on the payroll.

“We don’t plan on making a profit anytime soon,” he said.

Waiving the fees would help lessen “the bleeding,” he said.

Goodwin said that for his business, the restrictions amount to a shutdown.

“I can’t do any carryout at all,” unlike restaurants and microbreweries, he said. His business is a bar only, and the only full-time workers are his wife and himself.

“It would help tremendously,” Goodwin said.

And it would help the city in the long run, he said, because it would keep small businesses from going under.

Walker said that it wouldn’t be a refund, it would only be asking the city to temporarily forgo money coming in, and it wouldn’t all at one time, because the fees for some businesses would apply to 2020 and for others to 2021.

Roy Hudson, who chairs the local licensing board, said he and the other member who met last Monday, Todd Blanton, made no decision on a recommendation because the third member, David Lawrence, was absent and they wanted to wait and involve him.

On Nov. 5, before the governor announced a second ban on indoor drinking and dining in restaurants and bars effective Nov. 20 to Dec. 13 to slow the spread of COVID-19, he said the Department of Alcoholic Beverage Control would waive state license renewal fees for 12 months. Those business owners who had not yet renewed for 2020 would be granted relief until their 2021 renewal dates, and those who had already paid for this year would have their 2021 fees waived.

Several larger cities also waived their own license fees, including Lexington, where Mayor Linda Gorton did so by executive order.

Mayor Ed Burtner of Winchester said Friday he isn’t allowed to do that himself because the city’s form of government and his role as mayor are different from Lexington’s.

“I’m not aware of any authority I have to waive any fees on my own. That has to be a legislative action,” Burtner said.

The mayor also said he couldn’t say whether he supports the proposal because he doesn’t know exactly what he’s being asked to support.

The matter has not yet been before the city commission, which meets Tuesday night. But at least one commissioner is open to the proposal.

Even restaurants that remain open for carryout have been hit hard, and waiving the fees would be a way the city could offer relief without having an adverse effect on its bottom line.

“It’s a nominal fee, but it would really help them,” he said.