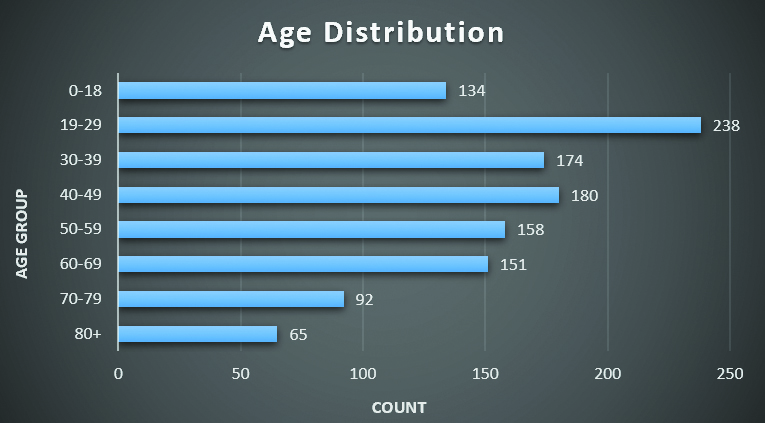 A graph from the Clark County Health Department shows the age distribution of COVID cases locally as of Friday, Dec. 11.

At least 122 new cases of the coronavirus and two additional deaths were reported in Clark County last week.

However, during the first week of December, the Clark County Health Department reported 116 cases, which was a noticeable decline from the week prior.

Last week, the Health Department reported 40 cases on Monday, Dec. 7, which was the most cases ever reported in a single day. There were 15 cases reported Tuesday, 13 reported Wednesday, 21 reported Thursday and 16 reported Friday. Over the weekend, there were 17 cases reported, but Public Health Director Rebecca Kissick said those numbers are limited to only those cases reported in the National Electronic Disease Surveillance System.

As of Friday, the Health Department reported that there had already been 235 cases reported in December, and the new weekend numbers would bring that total up to at least 252. There were 341 cases reported in November, which is the most on record in a single month since March, when the first case was reported locally.

As of Friday, there were 213 active cases and 962 residents had recovered.

Also as of Friday, the county’s incidence rate was 51.6, more than twice the threshold for counties considered in the critical red zone for new cases.

The red zone is for counties with an incidence rate, which is the rate of new cases over the past seven days per 100,000 population, of 25 or higher. As of Monday morning, all but one Kentucky county was categorized in the red zone.

As of the Dec. 6 White House Coronavirus Task Force report, Kentucky was in the red zone for new new cases and ranked 22nd in the nation for new cases.

According to the report, between Nov. 8 and Dec. 4, 403 patients with confirmed COVID-19 and 117 patients with suspected COVID-19 were reported as newly admitted each day to hospitals in Kentucky.