Day of giving: Operation Happiness goes on, but with changes because of COVID 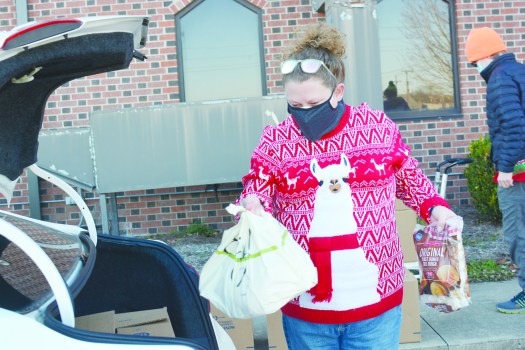 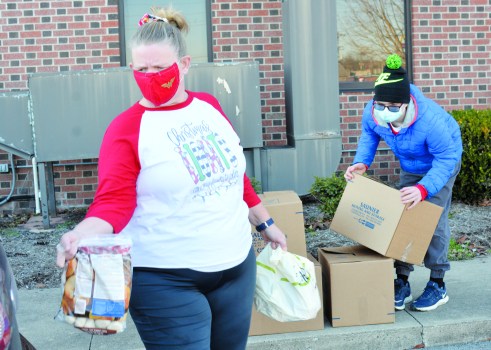 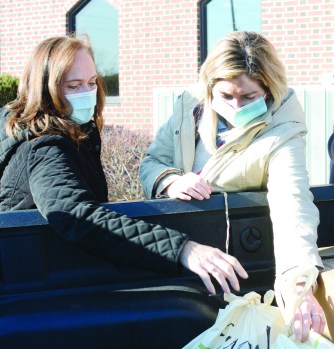 Sekisui employees Melissa Yates and Blossom Riffe volunteer for Operation Happiness, placing food into the back of a pickup truck. (Photo by Randy Patrick) 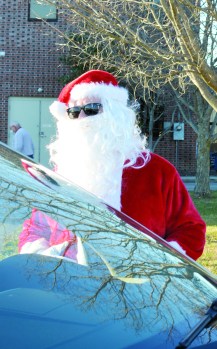 A driver who knows Santa Claus stops to chat after receiving a food box. The winter sun was so bright the jolly old elf had to wear shades. (Photo by Randy Patrick)

Santa's elves, Maggie and Hannah Manley, waved to people as they drive by the Episcopal Church to get food boxes during Operation Happiness. (Photo by Randy Patrick) 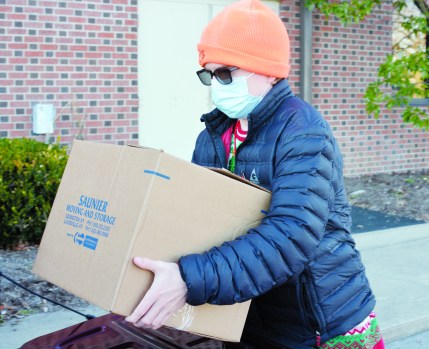 There’s an old saying that many hands make light work. But at this year’s Operation Happiness Day of Giving, there were fewer hands and more heavy lifting.

At the same time, there were more neighbors in need of helping hands.

Instead of having people come through Emmanuel Episcopal Church’s gym to get boxes of food and coats and gloves, volunteers moved the distribution outside, loading the donated items into the trunks of people’s cars and greeting them from a safe distance.

It’s yet another example of how the coronavirus disease has forced people to rethink how to do things so as to reduce exposure to unknowing carriers.

“We’ve had to adjust a lot of things,” such as packing the boxes inside Monday night so as to reduce “the number of touches,” which was what they were also doing Tuesday when giving them away, volunteer Mike Fatkin said.

One woman asked volunteers to put the boxes in the car seat instead of the trunk and was told they weren’t allowed to do that.

“It’s less contact with the clients, which is the part I don’t like, but it’s definitely working well,” Fatkin said. “People tend to be patient with us, they seem to be adapting to it.”

They’ve been learning as they go, he said, what works and what doesn’t and making changes.

Fatkin said there had been a steady stream of volunteers coming and going throughout the day, but fewer people doing more tasks.

Before noon Tuesday, there was a team of employees from Sekisui loading boxes into vehicles.

“We do this every year, but this year, it’s obviously different because of COVID,” said Melissa Yates, a manager at the industrial plant.

Instead of having a large number of workers, there, she said, they would have two to four more come every four hours.

“We have not done it this way before,” said Nancy Lindsay, a regular volunteer for Clark County Community Services, which Fatkin’s wife, Debbie Fatkin, administers. “We’ve done it on the inside, and this time we’re on the outside, but it seems to be working pretty efficiently.”

Tuesday was bright and sunny throughout the day and warmer than it had been, which made it more pleasant, Lindsay said.

Debbie Fatkin said the need was greater this year. Many people are out of work because of the effects of the pandemic on the economy. The distribution was scheduled for 9 a.m., but some came early.

This year Operation Happiness served well over 1,000 people, including more than 200 elderly people who had boxes of food delivered to them at places such as the Brown-Proctor, the Kerr Building and Beverly White Towers.

Joy Graham, a CCCS volunteer, explained that people get on the list for the food by calling an Operation Happiness phone number in November and being “vetted through the system” to see whether they are needy. Graham and others were working at tables under a tent where they sorted through registration cards so they could check the names and identification of people when they come by and then give them two slips one for the windshield of their vehicle for the food and another that they can redeem at CC’s Closet for a warm winter coat.

The annual Christmas program is a partnership between Community Services, a local nonprofit to help those in need, and the Clark County Association of Churches.

Emmanuel Episcopal Church hosts the event every year, and many of its members participate, alongside volunteers from other churches, businesses and organizations.