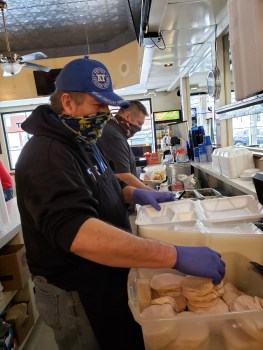 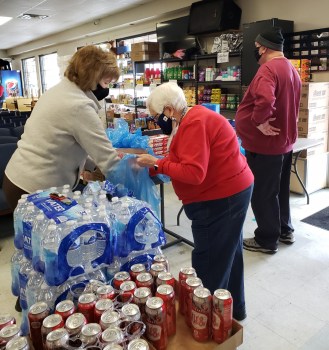 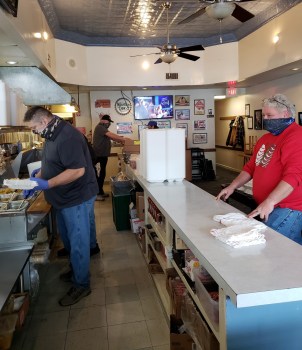 Bobby Wolfe, right, who came up with the name for the free Christmas dinner, Giving Back to Winchester, waits on to-go boxes while Bruce Pritchett works behind the counter. Wolfe, a Little Debbie distributor, was one of the sponsors of the event.

Nearly 400 people who might have been without a big traditional Christmas dinner got one for free last Friday, thanks to the generosity of the family who own and work for Bargains on Broadway & Cafe and several of their friends.

They all took a couple of hours out of their Christmas Day to come in and cook and served boxed dinners to go.

Robert Pritchett, co-owner of the retail store, auction and diner, said Pastor Ryan Dotson delivered about 90 meals to the city and county fire departments, the jail and the hospital, and about 300 more meals were given to people who came by the restaurant.

“It went real well for the first year,” said Pritchett, who plans to make it an annual event.

“I’ve already got people who want to volunteer” for next year, he said.

Pritchett said before Christmas that this has been a tough year for many people because of the coronavirus pandemic, and he and his friends wanted to do something to help.

Bobby Wolfe, Shannon Cox, Pat and David Perdue, Dotson and several other friends offered to pitch in when they heard about it.

Because of the risk of the virus, the meals all had to be carryout, but people could get multiple boxes to feed family members.

The meal consisted of large portions of ham, turkey, dressing and gravy, green bean and baked apples, as well as Ale-8 and Little Debbie snack cakes.