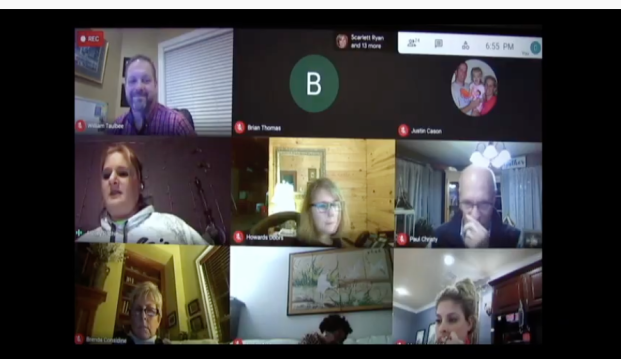 The Clark County school board had to conduct its first meeting of the year virtually Jan. 4. (YouTube screenshot)

Ritchie to lead school board again

Ashley Ritchie will continue as chair of the Clark County Board of Education as it begins the new year with some new members, but the board will have a new vice chair, William Taulbee.

Taulbee nominated Ritchie for the chairmanship, and a new board member, Brenda Considine, seconded the motion, which passed 5-0.

Considine then nominated Taulbee to be vice chair, Ritchie seconded, and it too passed unanimously.

There were no other nominations for either office.

Taulbee succeeds Sherry Richardson, who remains a board member.

The other new member elected in 2020 is Megan Hendricks, a real estate agent, who succeeded Gordon Parido.

Parido and Scott Hisle, who was succeeded by Considine, chose not to run for re-election last year. Both had previously chaired the board, Parido before Ritchie and Hisle before Parido.

The board unanimously appointed Superintendent Paul Christy to be the board secretary.

Ritchie mentioned that although Christy is formally secretary, his executive assistant, Arlene Nance, actually performs the duties of board secretary.

During the organizational meeting, the board also approved dates for board meetings. It will meet two more times this month, on the third Tuesday, Jan. 18, and the fourth Monday, Jan. 25. All meetings are at 6:30 p.m.

The board also approved its vision, mission statement, goals, powers and duties, protocol, best practices, and receipt and verification of open meetings and open records documents, all formalities that required no discussion during the meeting.

The only other item on the agenda was a change order, which Christy had negotiated down to less than $20,000 so he could approve it himself without a board vote, although he talked with some board members about it. It was for sod for the practice field around the new athletic complex. By doing so, he saved the school district $5,000 and ensured that the turf would be ready for use this summer by the track and football teams and band.

He said the company, Rising Sun, had started cutting the sod and would start putting it down in the next day or two, weather permitting.

Christy offered to give the new board members a tour of the high school’s new athletic facilities.