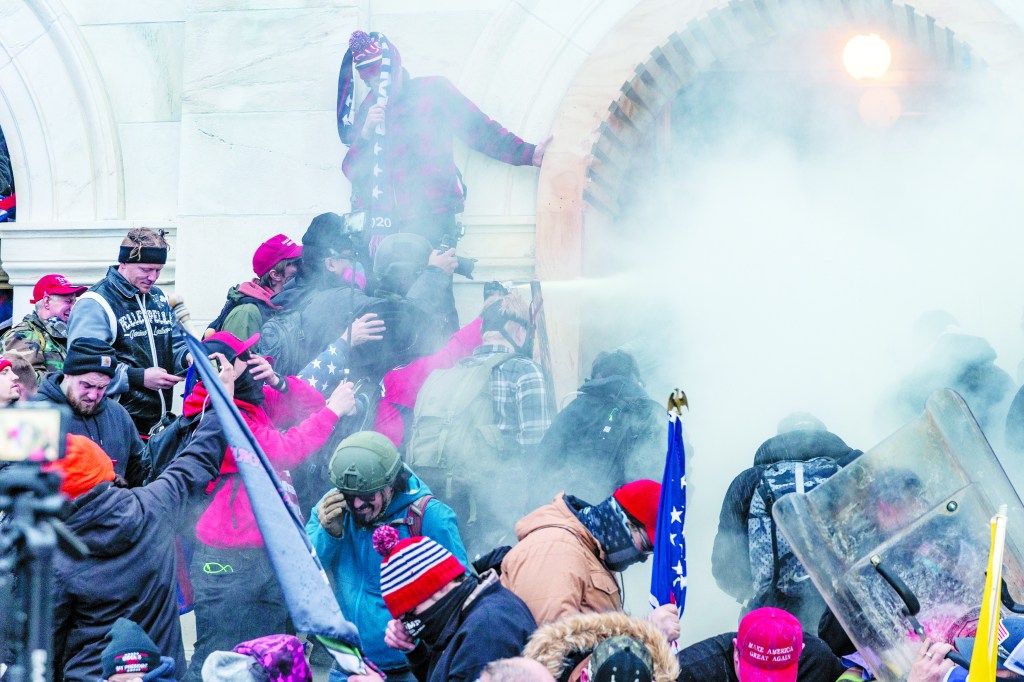 Rioters use tear gas while clash with police trying to enter the Capitol building through the front doors in Washington, DC on January 6, 2021. Rioters broke windows and breached the Capitol building in an attempt to overthrow the results of the 2020 election. Police used buttons and tear gas grenades to eventually disperse the crowd. Rioters used metal bars and tear gas as well against the police. - Photo by Lev Radin/Sipa USA)(Sipa via AP Images

What began Wednesday as a rally to show support for President Trump on the day Congress was to certify the Electoral College’s vote count turned violent as demonstrators invaded the U.S. Capitol, smashing windows and furniture and clashing with police.

Some Winchester area residents who were there say that what they witnessed was a mostly peaceful protest.

Wayne Elkins, a Winchester businessman and brother of County Attorney William Elkins, was among those who took part in the demonstration.

He said he attended because he thinks the election of Democrat Joe Biden as president was fraudulent, and he wanted to support Trump.

“I believe, quite honestly, that there was so much cheating that took place that I don’t feel like we can honor the election,” he said.

Elkins said he didn’t see anyone climbing the walls of the Capitol building or breaking in because he was about 300 yards away.

There were “a million patriots” and a few who “got out of hand in the end,” he said.

Elkins said he believes some of the rioters at the Capitol were “the same people” who have committed acts of vandalism and violence at Black Lives Matter rallies.

He said he heard one of the leaders of the break-in was “an antifa guy” who had been arrested on prior occasions.

Antifa, which means antifascist, is a leftist movement.

Vanessa Downey of Richmond said she also believes some of the troublemakers were leftist demonstrators pretending to be Trump supporters.

“I know antifa was there because we saw them … in and out of the crowd all day,” she said.

She said she could tell who they were because “there were a lot of kids dressed in black” who were wearing “Trump hats” turned backward.

She said a friend of hers saw a busload of antifa people arrive and police opened the gates for them and let them onto the Capitol lawn.

A fact-check article by The Associated Press said there is no evidence that the rioters were antifa and that there are images of well-known pro-Trump demonstrators among the rioters.

Downey, Jeff Lainhart, also of Richmond, and Kathy Page of Corinth were returning from Washington Thursday and called The Sun to describe what they saw.

“We met up with a million patriots from all over the country,” Lainhart said. “They were peaceful and respectful. There was singing and chanting. Everybody was great.”

“It was a happy crowd,” Downey said, “until we got to the Capitol, and then it changed rapidly.’

She said they were close enough to see people scaling the walls of the Capitol and heard explosions of tear gas.

Downey said they listened to President Trump’s speech before the rally, and “he didn’t incite them.”

Before the riot, the president said, “We will never concede” the election. And on Dec. 19, he had tweeted: “Big protest in D.C. on January 6th. Be there, will be wild!”

After the break-in, however, Trump called on people to be peaceful and go home.

Several people were injured during the riot and one woman was shot and later died.

Downey said that she went to Washington to voice “support for free and fair elections.”

“We wanted them to know how many people they were disenfranchising,” she said.

Election officials across the country, Republicans and Democrats, have said there is no evidence of widespread voter fraud that could change the outcome of the election in any state. There have been multiple recounts and numerous court challenges that have been rejected, some by judges appointed by the president.

However, on Wednesday, some Republican members of Congress, such as Josh Hawley and Ted Cruz, refused to certify the election results, and Trump urged Vice President Mike Pence not to accept them.

After members were placed in lockdown for their safety and order was restored in the Capitol, Congress returned and certified Biden’s win. The electoral vote count was 306-232, and the Democratic president-elect had a popular vote lead of about seven million, more than Trump won by in 2016.

Earlier in the day, two Democrats had also been declared winners in special Senate run-off elections in Georgia, and there were allegations of fraud in that election as well.

Judge Julia Adams of Winchester, a retired circuit court judge, said she presided over one election fraud case as a special judge.

It is extremely difficult to commit widespread election fraud, she said.

Adams said the country’s founders were wise in leaving elections to the states to manage, and today that means a presidential election is in the hands of 3,141 election officers, such as Kentucky county clerks.

“It would be very difficult to work a systematic fraud,” she said.

Adams said that if someone is asking for special relief such as an injunction, the courts must find that their case is strong, both in facts and in law, and the judges in the election cases did not find that to be so.

“It is a sad day for America,” she said.

The idea that Pence could have overturned the electoral tally  is “unfounded in law,” she said.

“We don’t ever want to be in a position where we tell voters in the United States of America that their votes don’t count.”

Retired Army Col. Jerry Cecil of Winchester, a former history instructor at Lexington Community College, said he was “appalled” by what happened in Washington, where hundreds of National Guard troops had to be called out to defend the Capitol.

“I took an oath to support and defend the Constitution against all enemies, foreign and domestic,” he said.

Peaceful protest is acceptable, but violence has no place in American democracy, he said.

As with the Black Lives Matter protests last year, he said, he thinks those who committed such acts were “a few bad actors.”

“I never thought it would happen, but a lot of things I thought would not happen have happened,” he said.

“There is no excuse in civil society for violence and destruction,” he said. “I have faith that people still recognize the importance of working together, even if it sometimes results in passionate debate and disagreement. We should all strive for a more civil and peaceful dialogue in our daily lives.”

Greg Elkins, a Clark County magistrate and a Republican, said he respects the right of people to peacefully demonstrate, but not to revolt in the way some did Wednesday.

“I hope what happened yesterday never happens again,” he said.