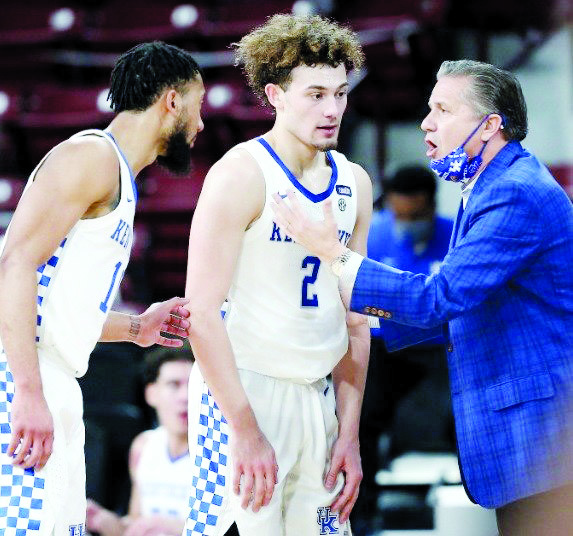 Devin Askew didn’t mind taking a back seat to his more experienced teammates during Kentucky’s struggles earlier this season.

“I kind of looked at it as like I needed it,” said Askew, who scored 11 points and dished out seven assists in Kentucky’s 78-73 double-overtime win over Mississippi State last Saturday in Starkville. “Like, (coach John Calipari) did that to take the pressure off of me and I’m in for whatever the team needs and that’s what we needed at the time. I went with it and I was confident in it. I had no problem stepping back and it worked out.”

For Askew, the biggest concern was being patient and taking his progress slowly as opposed to a faster pace earlier this season.

“I know what I can do,” he said. “(I) just  (kept) working hard and playing through the struggles, and that’s all it was. I just felt like I gained a lot more confidence out there on the court after the Notre Dame game and it just keeps improving. I’m back to myself, so I feel great.”

In addition to patience, Askew said the “demotion” served as an opportunity to settle down after getting off to a slow start.

“It allowed me to see the game from coming off the bench and it calmed me down,” he said. “It slowed the game down a little bit for me, so I got to see it. Then when I got my chance to start again, it was the same. I feel like I was in the same situation.  I watched film and the game was a little bit slower for me, so I felt a little more confident.”

Askew, who has never lacked confidence on or off the court, said the struggles were a unique experience and gave him a chance to develop his game from a different perspective.

“I was young, I still am young, but it was a new experience for me and it kind of just got thrown at me,” he said. “But I just believed in myself no matter what I was going to get through it and those early struggles didn’t bother me. They don’t bother me anymore.”

During the process of starting over, Kentucky assistant coach Bruiser Flint said Askew “never stopped working” and that played a role in the guard’s ability to come back at a quicker pace.

“He’s one of the hardest workers I’ve ever been around as a coach, period, in all my coaching career,” he said. “In that respect, he never stopped. And, again, he’s been working hard and he’s been doing the things that Cal’s been asking him to do (is to) run the team.”

Askew admits he doesn’t mind Calipari being harder on him because of his status as the team’s point guard.

“When he gets on me it’s because he wants the best for me,” Askew said. “He believes in me. He’s only doing it because he loves me. He’s our coach and he’s just an animated type of guy.

The Wildcats (2-6) will play host to Vanderbilt Tuesday night. Askew said the team is riding high after ending a six-game losing streak with the win in Starkville last Saturday.

“It boosted our confidence,” he said. “We finally got the taste of a win. We just want to keep going. Our confidence is high right now. And in our perspective, we’re 1-0 right now. The season just started, so we’re 1-0, so we’re happy. We’re undefeated.”