Where in the World: The several paths of ‘Old Boonesborough Road’ 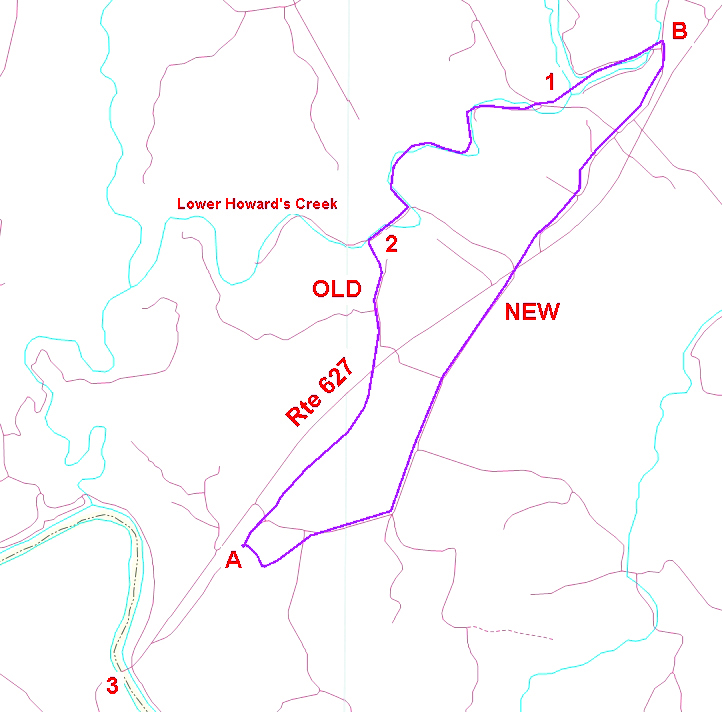 A map of Winchester-Boonesborough Road. The old road was in use until 1859, when it was replaced by the new road or what we call today Old Boonesboro Road. Point A was a toll gate about 1,000 feet south of the Old Rock Barn. Point B was about 1,000 feet north of Edd Lane. On the map are 1-Reservoir; 2-Old Stone Church; and 3-Boonesborough.

The story of Clark County’s rural road development is as fascinating as it is complex.

Initially, the counties bore sole responsibility for constructing all roads necessary to allow citizens to travel to the county seat.

People needed to get to Winchester to pay their taxes, appear at court and attend to other legal matters.

Roads were also mandated for access to mills, inspection warehouses and ferries.

Perhaps surprisingly, this led to creation of a great number of roads that no longer exist. Many are still in use today as farm roads. An interesting study could be made of these abandoned byways.

For many years in Kentucky, roads cost the counties little, since male citizens were responsible for providing labor to construct and maintain them.

Each road was divided into segments with an overseer appointed by the county court. Overseers called out workers as necessary.

These workers, who were unpaid, complained so bitterly that the state finally passed a law allowing counties to levy a tax to pay for labor. It turned out that Kentuckians hated taxes more than their forced labor, and the law was soon repealed.

All roads had to be built to accommodate wagons carrying goods to and from markets, although they did so with varying degrees of success. Before macadamized highways became the norm, a rain could cause even the best constructed road to wash out or become filled with giant mud holes.

The first big improvement in rural roads came during the Turnpike Era, from the early 1800s to the turn of the century, when Clark County began purchasing the turnpikes from their owners. Turnpikes were built by private companies whose shareholders paid for their construction and collected tolls for their use. The first authorized in Clark County was the Lexington & Winchester Turnpike Co. that replaced Strode’s Road to Lexington in 1838 (now US 60).

The road to Boonesborough is one of the earliest, predating the creation of Clark County.

The path between the two was frequented by pioneers in search of land. Wagons, of course, were not thought of at that time.

By 1783, Virginia had established a ferry and an inspection warehouse at Boonesborough. A year later, a group of Baptists moved north of the Kentucky River; here they began building homesteads, clearing fields and growing crops.

To get their tobacco to market they had to get to the ferry, cross the river and deposit their tobacco in the warehouse for inspection prior to shipping downriver. By 1789, flatboats were making annual spring runs down Kentucky River to reach the New Orleans markets.

Around that time, Fayette County must have ordered the path from Strode’s Station to Boonesborough improved for wagon travel. Although their county records have been lost, we know that the road followed Lower Howard Creek for a ways downstream. The road left the creek just south of the Old Stone Church and headed overland to Boonesborough.

Clark County Court held its first meeting in March 1793. By October, after Winchester had been selected as the county seat, the court appointed John Baker, John Judy, David Bryan and James McMillan to view the best way for a road from there to Boonesborough.

The road they had in mind was to strike the existing Strode’s Station to Boonesborough Road at “McMillan’s plantation.” McMillan’s land is today the site of the Reservoir, formed by the dam across the North Fork of Lower Howard’s Creek.

That new segment of road, with only slight modifications since 1793, is still in use today. It leaves South Main Street at what is now Boone Avenue, continues out Route 627 about a half mile south of the Bypass, where it turns onto Old Boonesboro Road. From there it follows Old Boonesboro Road to the Reservoir, near McMillan’s old place.

At that point the new segment joined the old wagon road from Strode’s Station, shown on the map as the old road.

The wagon road went down Lower Howard’s Creek to just south of Providence Baptist Church (Old Stone Church). There it left the creek and went south along what is today Quisenberry Lane then took a now-abandoned route to point A on the map.

This route was used for travel to Boonesborough until 1859, when the Winchester-Kentucky River Turnpike Co. proposed a new road that avoided the numerous crossings of Lower Howard’s Creek.

The new road began near the Reservoir, at point B on the map, and proceeded to a toll gate at point A. This is essentially the route of what we now call Old Boonesboro Road.

The map was plotted from “the metes and bounds” measured by Thomas Hart, the county surveyor at that time.

The new road, though still in use, was replaced by Route 627 in the 1970s. The latter is thus the third route from Winchester to Boonesborough.

I remember traveling Old Boonesboro Road in the 1950s and 60s on the way to basketball and football games in Richmond. In the daytime it was a very pleasant drive if you weren’t in a hurry. Much of the road was lined by stone fences on both sides and had many scenic views along the way. Coming back at night was a different experience. Then the road seemed terribly curvy with no place to pass slow moving vehicles.

Today, as we hurry up and down the nearly arrow-straight path of 627, it’s hard to stay below the speed limit. That’s progress. Watch out for those flashing blue-lights.