Wildcats ‘fight like heck’ to hold off gritty Commodores, 77-74 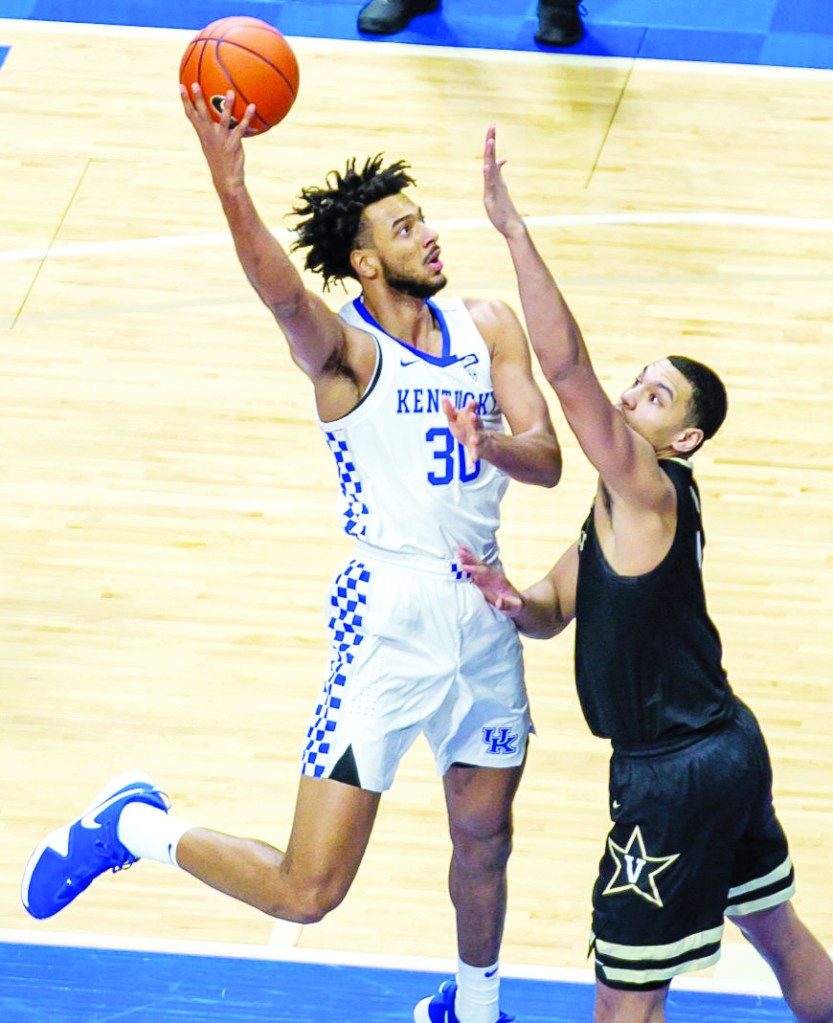 Vanderbilt is always a struggle for Kentucky, and Tuesday night was no different.

“Every year we play them, it’s exactly the same way,” Kentucky coach John Calipari said. “They make all the shots and then we have to fight like heck to win a close game — every time we play them. Last year, the year before and every coach, not just this coach, the last one and the one before that. I’m happy for the kids. It’s a win.”

Davion Mintz hit a 3-pointer with 47 seconds remaining to lift the Wildcats to a 77-74 victory over the Commodores. The win was the second in a row for Kentucky, which defeated Mississippi State last Saturday to end a six-game losing streak.

“I don’t feel like I played my best game, but just the fact that a win is a win,” Mintz said afterward. “It doesn’t matter what I do out there. Just taking away from the games we’ve been through this season, I don’t care if it’s a middle school team, a win is a win and we’re happy about it.

“We’re just going to keep progressing and keep going. It boosts our confidence and everything that we can take, we want. … it is trending and we’re going in the right direction.”

Calipari said the trey by Mintz came down to execution and credited the players, including Jacob Toppin, for sticking with the game plan down the stretch.

“They’re worried about their team instead of themselves,” he said. “Every player has a role. Jacob Toppin was ridiculous. Whoever fights I need them in the game — I need fighters just like we did at Mississippi State — I need fighters.”

Vanderbilt (4-4, 0-2) had two chances to tie the score in the final six seconds but missed two treys, including a long-range attempt by Maxwell Evans that bounced off the rim three times at the buzzer.

“My heart was dropping,” Mintz said. “Thank God it rimmed out of there.”

Mintz and Devin Askew combined for 22 points as Kentucky’s backcourt committed just two turnovers, both of which came in the second half.

“We had only two turnovers, which is crazy,” Calipari said. “We’re talking about a team that led the nation in unforced turnovers. You could tell the last few weeks what we’ve all been working on, getting the easiest play, and not trying to be a hero.”

Olivier Sarr led the Wildcats with a team-high 24 points and grabbed seven rebounds. Sarr made 14 free throws on 17 attempts before fouling out with 1:03 remaining. Sarr has scored 38 points in the past two games, giving the Wildcats a solid presence in the post.

“I’ve been focusing on fighting and competing,” he said. “I’ve been playing my game out there and there’s no pressure. I’ve been locked in and having fun at the same time.”

Dontaie Allen continued his offensive surge and finished with 14 points to go along with five rebounds. Calipari was pleased with Allen’s offensive performance, which he says helped offset defensive lapses at times.

“Dontaie broke down a ton today defensively,” Calipari said. “He made baskets and free throws when we needed it. He may have given up as many as he scored, but I told him, if that’s the case and it’s even Steven, I’m probably good with you.

“He deserves to be on that court and you know what he does to the defense. He had some breakdowns, but as I told him (after the game), you’ll have seven or eight breakdowns. Let’s just get it to four and keep making shots.”