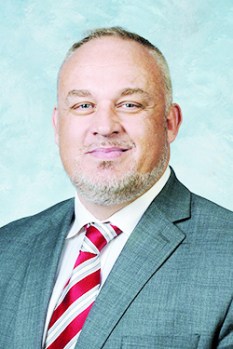 Clark County’s two state legislators, Sen. Ralph Alvarado and Rep. Ryan Dotson, will discuss the work of this year’s session of the Kentucky General Assembly during a one-hour Facebook Live forum hosted by the Winchester campus of Bluegrass Community and Technical College.

“I’m going to be the moderator, and we’re asking them to give an update” and answer questions from the audience, Bruce Manley, executive director of the campus, said.

He said people will be able to use the online chat option to ask questions and comment.

This will be the second year the college has hosted the program.

The “Legislative Update” will be live on Tuesday, Jan. 19, at noon on Facebook.com/BCTC Winchester, and will be recorded for people to view later if they can’t do so at that time.

Manley said the legislators will meet at the college’s campus in the Winchester Industrial Park, and Dr. Koffi Akakpo, president of the college, will be there.

The current odd-year session is only for 30 days, but the Republican majority in both the house and Senate have an ambitious agenda. Already both have passed bills to restrict the governor’s authority to issue executive orders to impose public health restrictions on businesses, schools and churches to try to curb the spread of the deadly coronavirus and limit how long those orders can last. They are considering a citizens petition to impeach Gov. Andy Beshear for allegedly overstepping his authority in dealing with the pandemic. And they intend to take up a proposal to move most state government lawsuits out of Franklin Circuit Court, where most conflicts involving state government are now litigated. They must also pass a budget because last year they only approved a one-year budget rather than the usual biennial spending and revenue plan.

Alvarado and Dotson are both Republicans. Dotson, a Winchester preacher and businessman whose 73rd District includes all of Clark County and a small part of northern Madison, was just elected last November, running mostly on a platform of limiting the governor’s executive powers. Alvarado, a Winchester physician, represents the 28th District, which includes Clark and Montgomery counties and a small part of Fayette. He has served in the state Senate since 2015 and was former Gov. Matt Bevin’s running mate for lieutenant governor in the 2019 election.