Hoskins not a big talker off the field 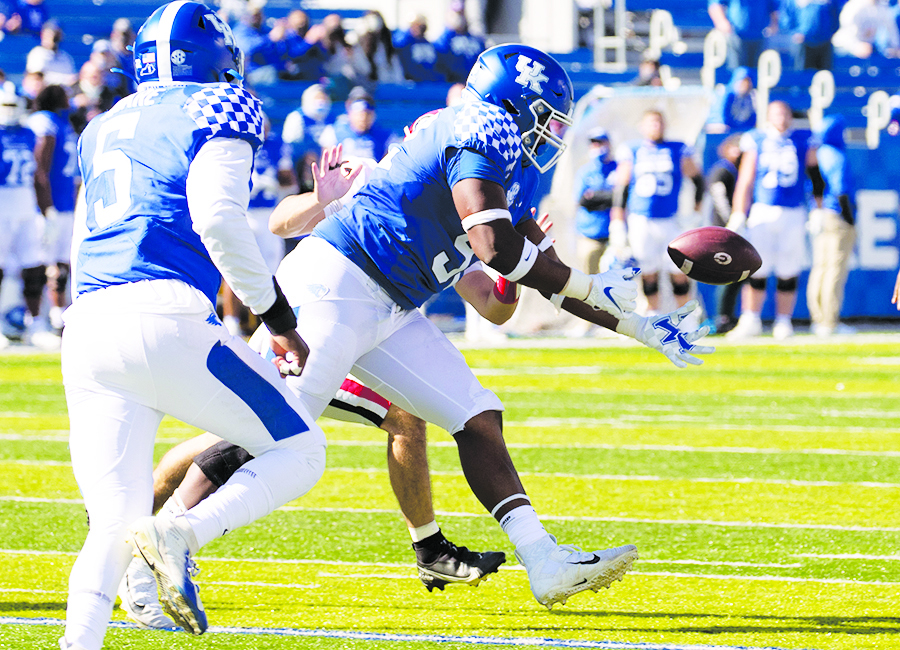 Talking is something that Kentucky defensive lineman Phil Hoskins has never minded doing. Ask him a question, you’ll get a truthful — sometimes humorous — answer.

About the only thing he won’t talk a lot about is his success and personal growth during his six-year collegiate career, including the last four years at Kentucky after transferring from Highland Community College.

Still, he’s overcome having to go to junior college out of high school, a severe knee injury at UK and becoming a father.

“To be honest, I usually don’t speak on it much. I would say I am very proud of myself. But to hear my family and even coaches tell me how proud they are of me …. because when I first got here I was a JUCO guy. I ended up in JUCO because I was not the most mature guy,” Hoskins said.

“Even when I first got here coming from a college with two gas stations and 1,000 people in the entire town to coming to the University of Kentucky, it was like, ‘Look at this, look at that, let’s go here.’

“The growth I made, cutting out the partying, the girls and and actually just focusing on what I want to focus on and where I wanted to be, that was tremendous.”

The Toledo, Ohio, native was SEC defensive lineman of the week for his play in UK’s win over South Carolina to close out regular season play. He finished the season with 15 tackles, 15 assists, four tackles for loss and one quarterback sack — that came in the TaxSlayer Gator Bowl win. He also had four tackles in the North Carolina State win in the bowl game.

Kentucky coach Mark Stoops acknowledges Hoskins came a “long way” during his time at UK and grew into a player who enjoyed coming to the coach’s office to talk.

“Now he has a great big smile on his face and he just wants to talk about life lessons and just different things, and I love that.  Sometimes I’m a little pressed for time and I’ve got to move him on his way at some point, but I do love our talks.  Much different than he was before,” Stoops laughed and said before the bowl game.

Stoops remembers a preseason talk he had with Hoskins about how the lineman would handle bad times, something he had not always done well his first three years at UK.

“Those seem to always derail him. He could be real high, doing some really good things, and then anything that would get him off the rails would set him back.  If he wants to be a professional, wants to play at a high level, wants to be a consistent player for us, he had to learn to control some of the lows, and he’s been a really steady guy,” Stoops said.

“I think that’s an area right there that doesn’t get talked about as much.  There’s always going to be highs and lows and tough times and he’s handled it really well.”

Hoskins graduated in May of 2020 with a degree in community leadership and development and has started on another degree in family science with a minor in communication.

Hoskins said SEC player of the week honors and other things he accomplished were things he had the capability to do.

“But I just never completely locked in like I did this year because I wanted to do other things. When I realized what I needed to do, I had to do it this year,” Hoskins said.

“It’s like coach Stoops says. He says, ‘Men do what they have to do and little boys do what they want to do. It’s easy to get under the blanket and curl up when it gets tough or you can go out and do it.’ I had to do it and be a man and do what men have to do.

“I couldn’t do what I wanted to do because that would not get me to where I needed to be. I am extremely prideful of what I have had to do, what I have had to overcome, the injuries and everything else, and just locking in. So I am very proud.”

Hoskins knows it took a lot of “tough love” to get him where he is now. But he understood that is what it looks.

“Sometimes you need tough love to show you it is not always going to be lovey-dovey in the real world,” Hoskins said. “After my injury (during pregame warmups before UK played Florida in 2019), that’s what it was.

“It showed me I have to do this. You can’t do this for me. No one can do it for me. You have to do it yourself. That’s just what it was. A lot of tough love and a lot of good love, too. It was a collective thing. It was basically a team thing. I needed it. This was a tough season, kind of like pulling teeth. But there were a lot of enjoyable moments and out of anything bad there is always something good that can come out.”

Hoskins will be playing in the Hula Bowl later this month. That will give him another chance to showcase his skills to NFL scouts. Stoops already believes Hoskins can “definitely” play professionally.

“He’s one of those guys, he’s long and he’s loose and he can play fast,” Stoops said.