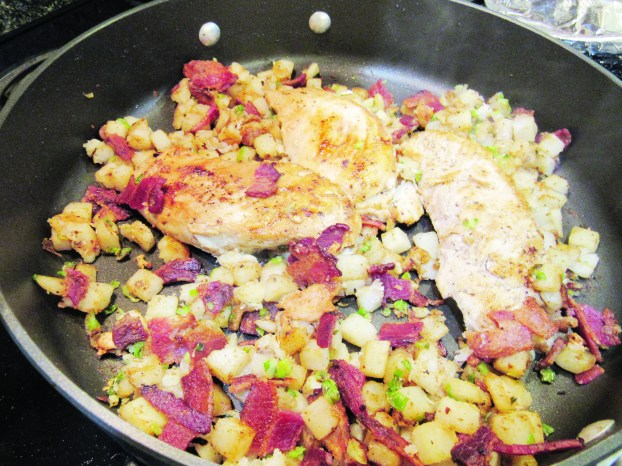 Some say bacon makes everything better, but it didn't help this Country Skillet Chicken.

Meanwhile crumble bacon and stir into potato mixture. Increase heat to medium-high, cook uncovered one to two minutes or until heated through and potatoes are lightly browned. Sprinkle with remaining salt and pepper. Serve potato mixture spooned over and around chicken.

I’d planned ahead and had frozen hash brown potatoes in the freezer and green onions in the refrigerator.

When it was time to start preparing supper, I cleaned the chicken. By cleaning, I mean removing any fat, veins, or anything else that isn’t just the breast meat. I placed the chicken in the refrigerator while I cooked the bacon. Usually I fix bacon in the oven, but since I just needed a few slices I pan fried it. My package of chicken contained three breasts so I fried 4 pieces of bacon instead of 3.

Once the bacon was cooked crisp and was removed from the pan, I added the chicken breasts and let them cook. This recipe, like most, only calls for cooking chicken for a few minutes. I always cook it longer, because I want to make sure it’s well done. Before placing the chicken in the pan, I sprinkled both sides of each breast with salt and pepper.

When the chicken was almost done, I poured in the frozen hash brown potatoes. After about five minutes, I added the chopped green onion and cooked everything until the potatoes were beginning to brown, then added the crumbled bacon and sprinkled in a little more salt and pepper. Once the potatoes were browned and the chicken was completely done, we were ready to eat.

This dish smelled great and looked so pretty, I was anxious to dig in.

Brad said a prayer ,and we served ourselves and began to eat. To my disappointment, this dish had almost no flavor. I sprinkled on a little more salt, hoping that would help; but it didn’t. At our house we say bacon makes everything better, but that sure wasn’t the case with this dish. I looked at Brad and asked him what he thought and he said it was just OK, but it wasn’t something he’d want again

I’m not sure what this dish needs to bump the flavor up, but it really doesn’t matter because it’s a Failed It and won’t take up a spot in my self-made cookbook.

On to the next recipe.

Nailed It or Failed It: Pecan praline skillet cookie

If we know people are coming to our house, I like to have some type of dessert to offer them.... read more