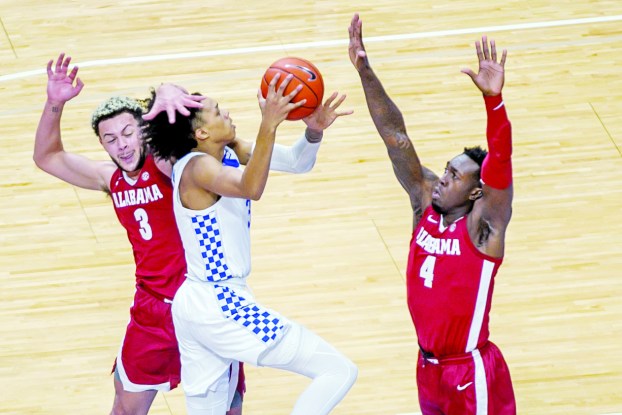 Kentucky's Brandon Boston Jr. is fouled going to the basket against Alabama on Tuesday. - Photo by Tammie Brown/Kentucky Today

The Crimson Tide (10-3, 5-0 Southeastern Conference) notched just their seventh win in school history at Rupp Arena with an 85-65 victory over Kentucky to remain perfect in league play and served notice to the rest of the teams in the conference.

The Wildcats had won 12 of the previous 13 games against the Crimson Tide, including eight in a row at home before Tuesday night’s setback.

Kentucky coach John Calipari said his team’s overall performance was “a mess” and was frustrated after the setback. He admitted his team picked up their past habits, especially on defense.

“Not one of our players played well,” he said. “I obviously didn’t coach well. … We got every beat every which way but loose. We were late to everything and we were backing away from players (on defense). Give Alabama credit, they came in here (and beat us).”

Kentucky (4-7, 3-1) won its first three conference games, including an impressive 76-58 win at Florida last Saturday, but reverted to past performances displayed during a six-game losing streak earlier this season. The Wildcats committed 19 turnovers, while Alabama took advantage of those miscues, scoring 29 points in transition. UK also had only seven assists after collecting 18 against Florida.

“You know what most of (the turnovers were)?” Calipari said. “The hardest play we can make. … I’m not even sure I will watch this tape.”

Kentucky also struggled on defense as the Crimson Tide sank 14 3-pointers, including 10 in the first half that allowed the guests to build a double-digit lead. Alabama led 42-30 at the half.

Kentucky forward Isaiah Jackson led the Wildcats with 14 points to go along with six rebounds and seven blocked shots.

Dontaie Allen made a pair of 3-pointers and finished with eight points and six rebounds for the Wildcats.

Calipari’s plan moving forward is to find “five guys who will fight and that’s who I will play.”

“When you’re getting clubbed, you’ve got no confidence,” Calipari said. “It’s like a (boxing match). You walk in the gym and you start getting hit in the head three or four times, it’s hard to be confident.”

A moment of silence was held prior to tipoff in memory of former walk-on Ben Jordan, who died Monday at the age of 22. Jordan also played on the baseball team as a pitcher. Allen said Tuesday was an emotional day.

“It’s been emotional,” said Allen, who learned of Jordan’s passing when he awoke early Tuesday. “Everybody is just trying to get through this together.”